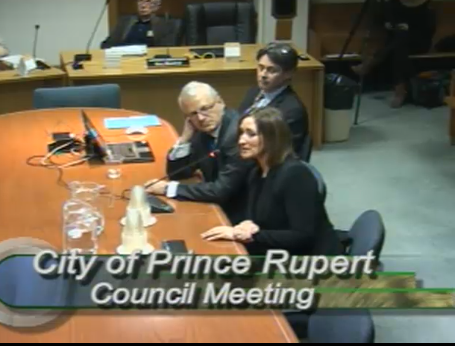 Representatives of the BG Group provided an LNG primer for Prince Rupert City Council on Monday night, a thirty six minute overview, that offered up a wide range of background on the LNG industry in the world view and BG's place in that global industry.

Dr. Andrew Walker and Miss Madeline Whittaker joined BG's local representative Herb Pond at the council table to provide the snapshot look at what the LNG industry looks like at the moment and where the company sees the industry over the next ten to fifteen years.

There was a fair amount of review on the nature of supply and demand and where Canada may find itself in that global supply situation over the next decade and beyond.

Following that LNG review, Council members were offered the opportunity to ask questions of their guests, seeking to find more insight into the industry and BG's plans for development of it's Ridley Island terminal location.

Councillor Kinney was the first to ask a question of the guests, inquiring what they would expect from the City of Prince Rupert. Dr. Walker outlined that projects such as these require a push to get them into existence, getting stakeholder alignment is key and that the project has to work for both BG and the community.

He suggested that the community should take the lead towards that alignment. He observed that over the years he had seen many of these supply chain projects fail owing to lack of alignment with the community that they are looking at.

Councillor Cunningham asked how many LNG projects that BG believes may be sustained in the area.  Speaking as to the buyer behaviour aspect of the question, Dr. Walker observed that the likely outcome would be that the province would see three LNG projects in the region by 2025, but not on the same timeline as the province has outlined.

City Manager Long offered up his thanks for the guests attendance to City Council and for the scope of the answers that were provided.

Councillor Cunningham followed up with a question on the progress of BG's Environmental Assessment. Miss Whitaker provided the timeline moving forward with a filing anticipated towards the summer.  To his question as to when a start up may be, Miss Whitaker outlined that depending on the process ahead, a final investment decision could be made by 2016 with a potential start up of operations by 2021.

Councillor Thorkelson had questions on employment regarding the proposed development, asking if BG had any plans to bring in any temporary workers from out of country. Miss Whitaker took to the microphone again, advising that the first preference of BG was to hire local workers as possible, and that the company was working with the Premier's working group on labour to maximize the benefits for the local region first.

Councillor Thorkelson followed up with a question as to when that employment plan would be outlined allowing the city to make plans for housing and other services that may be required.

Miss Whitaker advised, that the modelling on employment requirements work is still underway, BG anticipates coming back to the community later in the summer to outline some of their findings on the theme of a workforce for the project.

The Mayor advised the BG group that their information on employment requirements would be appreciated and that the city has already tasked staff with the prospect of making plans for future growth and service requirement that may come from the development of LNG facilities in the community.

Mr. Krekic, the city planner asked a question of Dr. Walker, inquiring as to the market dynamics in place and how BG would gauge the LNG industry compared to the oil industry.

Dr. Walkers' answer provided a bit of a comparison between the two industries and the variety of factors that could impact on price points and supplies, with gas being more of a diversified market.

Following that exchange, the Mayor thanked the BG guests for their contribution to the evening.

You can review the LNG lesson for yourself through the February 24th edition of the City of Prince Rupert Video Archive.

The session starts up at the three minute mark and continues on until about the 39 minute mark.

We have more on LNG development proposals for the North Coast on our LNG archive page.
Posted by . at 10:26 AM