Prince Rupert! The unofficial Northern BC Capital (for LNG anwyays) 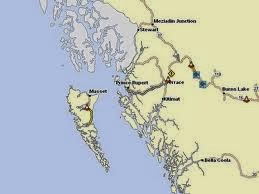 Oh my, Prince George residents aren't going to like what they read in the Globe and Mail this morning.

In the race for the title of unofficial Northern BC capital, Prince Rupert has apparently gained some traction at the national newspaper.

The Globe and Mail has put together some items on the growing buzz over LNG development in British Columbia and tucked away in the commentary is a line that will make Prince Rupert city Council smile but might gain a bit of push back from Prince George.

With Prince Rupert being described as "the unofficial capital of B. C.'s north", all be it with the caveat of "for the LNG boom".

That description frames a review of the impact of LNG development in Northwest BC communities and what they may be wishing for when it comes to infrastructure benefits from the arrival such large scale development.

Focusing on the three main communities of the region, the wish list includes:

Terrace
The desire for a second overpass to ease congestion around the railway that cuts across the city.

Kitimat
With hopes to see improvements to the Haisla bridge.

Prince Rupert
The ongoing discussion for an airport link and a resolution to traffic congestion from container traffic.

You can review that Globe and Mail snapshot here.

Another article in the Globe today expands on the LNG topic in the region, a fairly good overview of the possible transformation of the region.  A major shift in regional focus that many suggest could soon arrive, with the development of LNG export terminals in the Northwest.

The main thrust of the piece is a look at infrastructure and how the Province of British Columbia has been slow to address the issue and how the municipalities of the region are frustrated with the government for not addressing some of their concerns.

Kitimat, Terrace and Prince Rupert are all given a bit of a review, particularly to the nature of their current infrastructure woes.

With the Globe providing a brief synopsis of recent economic developments (and hopeful developments in the case of the potash terminal idea) as well as the need to improve local infrastructure.

For Prince Rupert the focus is on our airport access issue and the increasing flow of container trucks through the city, the apparent two key concerns from the city, for the Province.

While the Province made much mention of the potential of LNG in its recent Speech from the Throne, the article points out that in the communities that will be most impacted by the development of LNG, the need for improvement to the basic transportation issues is a more immediate concern.

To that end, the Globe finishes off their review with the note that Northern BC officials will be continuing on with their lobbying until an infrastructure plan is outlined by the Government.

You can explore more of the Globe's look at the Northwest here.

We have more on LNG development in the region in our LNG Archive and you can review more of the discussion points from Prince Rupert Council from our anchor page here.
Posted by . at 11:26 AM

Email ThisBlogThis!Share to TwitterShare to FacebookShare to Pinterest
Labels: Globe and Mail on LNG infrastructure woes in NW BC February 2014