We can add the Nisga'a Lisims Government to the list of those interested in seeking to bring LNG development to their community, with the Nisga'a reportedly putting up four potential sites for would be LNG developers to consider.

"The Nisga’a Nation is unique among Canada’s Aboriginal peoples. Because of our modern Treaty with the governments of Canada and British Columbia we have increased control of our land and our destiny and we are actively seeking opportunities for sustained economic development within our lands.

LNG provides a long term future opportunity for both our Nation and for your company. We welcome your interest and invite you to visit our people, our communities and our lands.”  ---H. Mitchell Stevens President Nisga’a Lisims Government

In a Financial Post article from last week, the plans of the Nisga'a (and attention generated by them) to get their foothold on the percolating LNG scene on the North Coast are outlined.

Providing background on the four sites identified along Portland Inlet that the Nisga'a believe would offer a tempting option for LNG companies to consider. 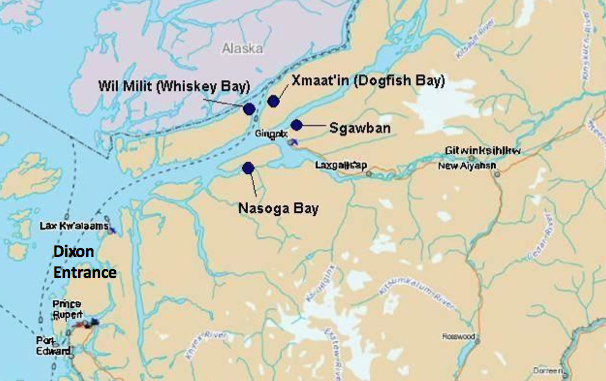 The Nisga'a have listed the four potential development sites as Nasoga Bay, Wil Milit (Whiskey Bay), Sgawban and Xmaat'in (Dogfish Bay). All which they explain are suitable for either a Floating or Land Based LNG facility.

The main selling point of the Nisga'a options would be the geographical location of the proposed sited which would result in reduced pipeline costs and with treaty provisions already in place with the Nisga'a, negotiations with the Nisga'a nation already have a base from which any would be investors can proceed on.

Should the Nisga'a find success with their marketing plan and put their stake into the growing LNG presence in Northwestern British Columbia, the economic future for the communities of the Nass would be changed significantly.

It's anticipated employment prospects could see some 200 - 300 jobs generated should development come to just one of the parcels of land up for investment. Significantly more, should all four development sites find a receptive partner.

The Nisga'a highlight the opportunities available with their Portland Inlet sites through a 40 page review on the Nisga'a Lisisms Government website.

The full article from the Financial Post can be found here.

We have more items of note on proposed LNG development on the North Coast on our archive page
Posted by . at 9:39 AM