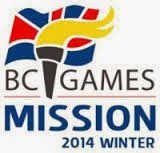 Prince Rupert will be well represented with the Northwest Zone squad as they prepare to head off to Mission later this month, ready to take part in the Opening Ceremonies and then the sports events of the BC Winter Games on February 20th.

The three day competition brings together athletes and coaches from across British Columbia, following the path of many before them who bring back more than medals from their journey to top level competition.

This year Prince Rupert is sending 17 coaches, supervisors and athletes to represent the Northwest. A collection which covers off such sports as Archery, Diving, Basketball and Women's Hockey.

Archery is represented by:

The 27th edition of the BC Winter Games runs from February 20th until February and features participation in 18 sports over the three days of competition.

Email ThisBlogThis!Share to TwitterShare to FacebookShare to Pinterest
Labels: BC Winter Games 2014 Mission