Home ice proved to be a key factor for the Terrace River Kings, who turned on the offence over the weekend to claim victory in their CIHL West Division playoff series with the Prince Rupert Rampage.

Prince Rupert headed into the weekend holding a 1-0 lead in the series, an advantage gained through a hard fought victory last weekend at the Jim Ciccone Civic Centre. Saturday and Sunday however provided a very different story as the River Kings, who were division leaders in the West for the last few months of the season showcased their skills, with a total of 13 goals over less than 24 hours.

Saturday the River Kings evened the series up with a 6-1 victory over the Rampage, with John Hunt picking up a first period goal, the only marker for Prince Rupert on the day, with assists going to Brad Deshane and Josh Kierce.

The Saturday evening scoring summary can be found here.

Sunday afternoon however, Terrace punched their ticket into further playoff action. Once again finding the net frequently, picking up another victory, this one by a score of 7-1 and bringing the Rampage season to a end.

Craig Munro goes into the scoring books for the season, having picking up the final goal of 2013-14 campaign for Prince Rupert, Kendal Stace-Smith and Jordan Weir provided the final helpers of the year.

The Rampage took to their twitter feed and facebook page over the weekend to salute the raucous collective of Prince Rupert fans that made the trip to Terrace to cheer on their squad. 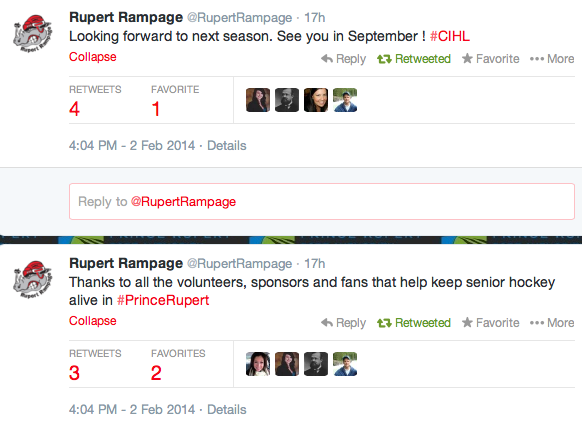 As their season came to an end, the Rampage also thanked their fan base for all their support through the 2013-14 season. Despite a challenging year for the team on ice, Prince Rupert's CIHL provided the highest support of any time for the CIHL league wide.

With a total regular season attendance of 5,240 and a average of 582 per game, in addition to over 800 at the Jim January 25th for the first playoff game with Terrace, the Rampage fan base has done their part to keep Senior Hockey a going concern on the North Coast.

While the Rampage now put the equipment away for the year and make their plans for the fall, the CIHL playoffs move on to the next phase. With Terrace taking on the Smithers Steelheads in the CIHL West playoff, while Williams Lake and Quesnel will face off in the CIHL East Division showdown.

You can review the 2013-14 Rampage season from our Results page, there is more on the CIHL season and playoffs on our archive page.