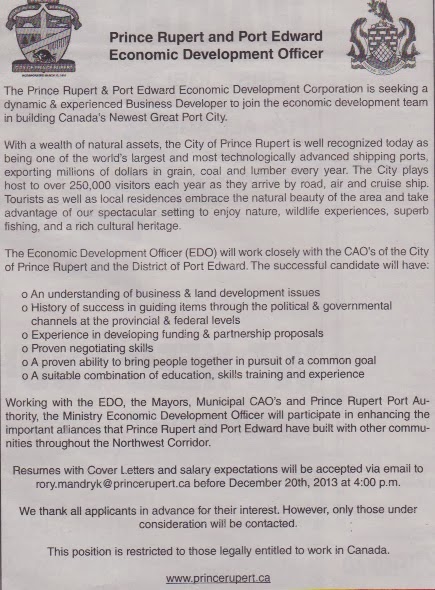 It's been some three months since Derek Baker, the City's Economic Development Officer moved on to the percolating LNG industry in the community and since that October 31st departure, there has been little news from the City to outline if a successful candidate has been found to fill the post.

The lack of movement on an Economic Development officer is puzzling, considering the City has been fairly proactive on positions which no one in the city even knew were required.

As we outlined on the blog in January, it was of interest to learn that the City had hired on Mr. Brent Meunier  to a contract position with the Recreation Department.

Apparently to provide guidance in a position that was not only never listed as available on the city's Job opportunities website, but a job opportunity which previously wasn't even known to be under consideration.

Meanwhile, over at the Economic Development office, the door remains closed, the desk apparently still empty now for three months and counting while the search apparently continues, all be it without any form of update from the Mayor or Council.

Something which leaves one to wonder about what is causing for the delay, in filling what should be a vital position at City Hall.

It's  interesting to note that Terrace recently announced the hiring of their new Economic Development Officer,  with Blaine Moore  recently installed in his office and already on the job and learning as much as he can about the economic picture of the Terrace area. Answering questions, talking to potential investors and would be employers.

For the last three months and now into a fourth, it appears that the City has decided to basically leave it to the Port of Prince Rupert, to fill the void of attracting industry and jobs to the Prince Rupert area.

Perhaps an update from the Mayor and Council is due. One where our elected officials, who seem to  discuss much in frequently held closed sessions, could share in the public one, a bit of background on the delay and filling us in on what the timeline of a hiring may be.
Posted by . at 9:07 AM