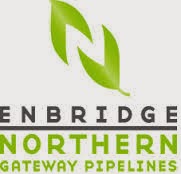 While many British Columbians enjoyed the Family Day weekend with their friends and family, some of the media team at Enbridge/Northern Gateway were busy taking to twitter and YouTube, providing content to a number of social media outlets.

Sunday, tweets started appearing on twitter taking issue with a number of points that opponents of the Enbridge Northern Gateway project have been pursuing in recent months.

One tweet in particular, seems to have set the theme of the new social media campaign that we imagine will surely engage the population of the province in the discussion. 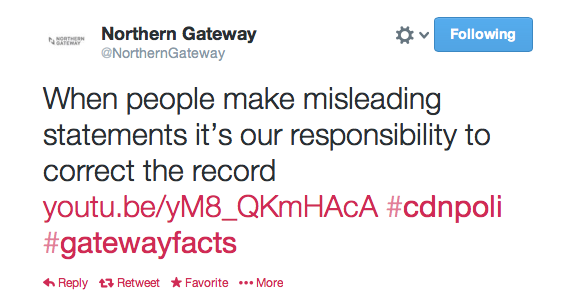 As well as that opening salvo of a renewed media campaign, Enbridge's social media team took to You Tube providing a number of videos to make their side of the story, a project that appears designed to woo those that have yet to develop a hardened position on the project.

The most recent of the videos added to that YouTube feed, takes on a number of claims by Northern Gateway opponents.


Many of the tweets and You Tube presentations direct readers and viewers to the gatewayfacts.ca portal, which explores more of the message that Enbridge is putting out when it comes to the Northern Gateway project.

If the wish was for further engagement of the public on the topic, Enbridge may be getting its money's worth from the media campaign, many of the tweets have been countered by those with concerns over the project, offering up alternative opinion and directing those viewing the Enbridge efforts with other information portals to review as well.

Whether all of this information flow makes the issues of the Northern Gateway any more understandable remains to be seen, but for those that find social media to be a useful forum for information retrieval and engagement, the discussion is there to be joined.

The new media campaign has not gone un-noticed by the media in southern locales, as they review the background of the new and fairly vigorous approach to information delivery.

You can find more on the debate over the Northern Gateway Pipeline from our archive page
Posted by . at 8:16 AM

Email ThisBlogThis!Share to TwitterShare to FacebookShare to Pinterest
Labels: Enbridge Northern Gateway takes to social media to share their side of debate February 2014