Full Speed Ahead for BC Ferries Northern Route cuts

For North Coast ferry users, the final word on Ferry service cuts was delivered on Wednesday

As Transportation Todd Stone announced that proposed route cutbacks to BC Ferries runs, including those on the North Coast and Haida Gwaii will go ahead as planned, with the first of the service changes set for April.

Details of the Governments intent was relayed through the BC Government website with the Transportation Minister outlining the decision.

More on the review and the cuts to come can be found here.

Since the report was delivered, a number of groups on the North Coast had offered up their concern over the direction that the Government was taking, appearing at consultation sessions and taking more personal approach with the Province.

All it would seem with little sway to their eventual decision.

Though some progress was made for those that live at Bella Bella and Bella Coola where the nature of the cutbacks were scaled back by a small measure, with BC Ferries planning to provide for three to four sailings in the summer, with a further review of the impact on the tourism industry to those communities apparently to come.

Still, the reaction from the North Coast has been quick as local politicians voice their concerns over the pending changes and the impact that they will have on communities and their local economies.

So far, the only reaction from North Coast MLA Jennifer Rice has been a short comment posted to her MLA facebook page. 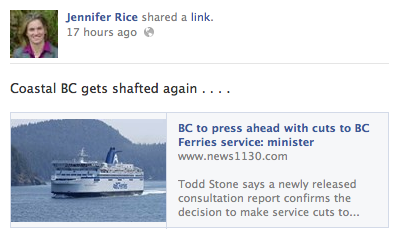 The BC NDP caucus did however make a more detailed response to the Province's decision, posting this item to their website on Wednesday.

The first of the changes takes effect on April 1st, a date that won't be lost on many travellers and those that rely on the BC Ferry service for more than just the occasional trip.

Email ThisBlogThis!Share to TwitterShare to FacebookShare to Pinterest
Labels: BC Ferry Cuts to go ahead