Early Sunday evening brought Prince Rupert Fire Rescue and the RCMP to the Commercial Pub site,  responding to a fire call at the long time North Coast fixture at the corner of First Avenue West and 8th Street.

Upon arrival, the Fire Department worked into the night to contain the blaze, while RCMP controlled traffic and kept interested observers to a distance to allow the fire fighters to do their work.

Sunday's fire at the Commercial was not the first for the structure in recent months, with Prince Rupert Fire Rescue  having been called to the location a number of times previous to put out small fires which were started around the exterior of the building

The Commercial Pub, a favourite local haunt of Rupertites through the eighties and nineties, had not been in use in recent years and had been on the real estate market for a number of years now.

The Sunday night fire at the Commercial Pub adds to the list of place names for the latest of old downtown fires.  Making for a collection of structures that has been engulfed in flames in that same small are of the city over the last ten years. 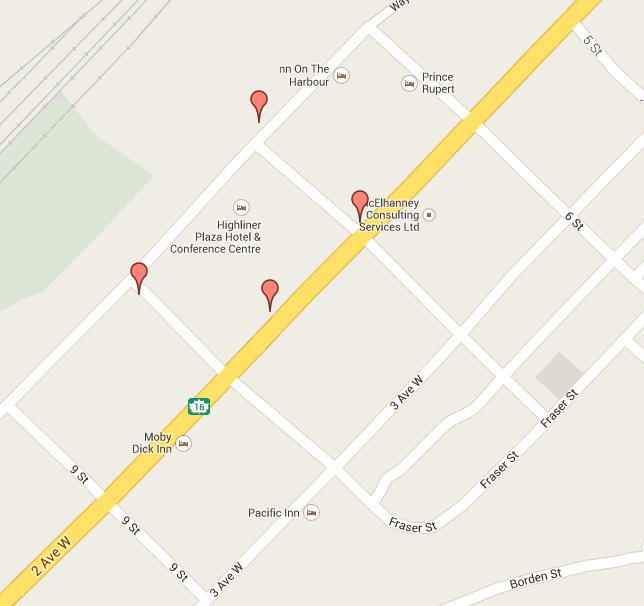 In 2004, fire fighters have responded to a major fire at the Elizabeth Apartments building on 1st Avenue West. A particularly challenging blaze owing to the nature of the building's location to the water side of the harbour.

More recently, Prince Rupert residents have seen fires break out at the Inlander Hotel in 2009, and most recently in 2010, at the location of the old Epicurean restaurant, both of those buildings were located on 2nd Avenue West, not far from the scene of Sunday's fire.

All three buildings were destroyed during the course of the incidents.

As of yet, no details have been released, as to the cause of the fire.

Update: Fire Chief Dave McKenzie has confirmed that the fire that engulfed the Commercial Pub building was set fire, with the investigation continuing into the incident. The damage to the building has been deemed a safety hazard and that considerations are now in place to make the building stable or to have it removed.