MLA Rice joins in on Budget Discussions at Legislature 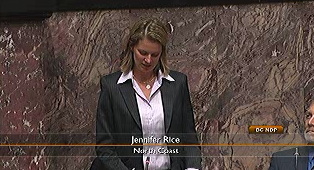 In her debut speech of the new session of the British Columbia Legislature proceedings, North Coast MLA Jennifer Rice touched on a wide range of subjects as part of her contribution to the Budget Debate.

Ms. Rice spoke to the Budget on Monday afternoon, offering a lengthy critique of the BC Liberals financial blue print for the year ahead, describing the Liberals budget as boring, a theme she repeated a number of times during the course of her speech on Budget issues.

As part of her review she provided for a number of her concerns, ranging from issues regarding LNG development to the lack of infrastructure assistance provided to Prince Rupert.
.
The budget is indeed boring. It's as if the goal is to meagrely survive. It surely lacks the boldness needed to allow our province to actually thrive. Time and time again we've heard how LNG is a once-in-a-lifetime opportunity and we must act quickly or we'll lose out to other jurisdictions such as Australia.

And yet we still have no real, concrete plan, no idea what this panacea is going to look like. There is no funding for communities such as mine in Prince Rupert to prepare for its first boom in over a decade. We still have wooden water pipes, and we lack primary sewage treatment in a marine area known for its global ecological significance.

Among her thoughts on the impacts of sudden industrial development, the strain that it will put on services and housing needs on the North Coast, in particular she has fears that the recent stories of housing shortages and rapidly rising rents will soon be a normal fixture in Prince Rupert.
.
Recently, in my constituency office I've had two visits on two different occasions where people were talking about renovictions. It is something that is currently experienced in Terrace and Kitimat, which has experienced the industrial pressures I was just speaking of, and Prince Rupert is coming on board with the same sort of path of cumulative impacts of industrial development.

I talked to a property manager in Prince Rupert recently. She said that in over 20 years of doing property management in Prince Rupert she has, for the first time ever, a zero percent vacancy rate. In fact, you can get a slum apartment for $1,200, which is a burden just unfeasible for the majority of the population in the north coast.

Other issues that she shared with the Legislature, were shortages of health and social services in the North Coast, the lack of action on the long anticipated shuttle bus for the Highway of Tears and a perceived disconnect between the planning for large scale industrial projects and her belief, of a lack of dedication to skills training in the community.
.
At Northwest Community College last year we had a 40 percent cut in faculty positions. One of those positions was at Northwest Community College in Prince Rupert. [1710] I was speaking with an instructor who was subject to those cuts. His job is to help people get the necessary math skills so that they can do a trade. He was one of those people that lost his job, in Prince Rupert. So I'm kind of confused about the identification of skills training being relevant and important, yet on the ground…

If I could just summarize, there's no question that we have a skills shortage, yet we have no strategy to deal with the skills shortage. I'm particularly interested in this because people are anxious in North Coast, with high unemployment, to actually embrace these LNG jobs that are supposed to be our panacea. Yet we don't really seem to have a strategy of getting those people on the ground.

Not to be left of her list were concerns over the recent cutbacks to BC Ferries, the lack of a dedicated strategy for dealing with aboriginal land claims and aboriginal issues as well as increases to MSP and ICBC premiums.

The Liberals at times took exception to some of her observations and provided her presentation with occasional interruptions, making for perhaps the first time that the MLA found a bit of push back to her contributions to the Legislative discussion.

Ms. Rice appears to have wanted to touch on all her talking points in one session, covering a variety of topics, which while ambitious, did tend to take on a bit of a scattered approach by the time the presentation had come to an end.

Still, it did serve to remind the governing Liberals (and the voters back on the North Coast) that there is voice in the Legislature who does have a list of items to raise. Though it may be that her rankings of their importance and those of voters back home may have different spots on the list.

You can review the full exchange through the Legislature Record of March 3rd, Ms. Rice's talking points arrive just after the 1700 mark on the register on the side of the page.

Her presentation to Legislature chamber is also available through the Video Archive of the Afternoon session for March 3rd, The Budget discussion starts up at the 212:00 mark of the Legislature Video player.

You can review more the MLA's work this session from our MLA's Week Archive.

We also feature a wider review of developments in Provincial politics from our Legislature Archive page.
Posted by . at 10:16 AM