It would appear that the members of City Council are making a few adjustments to the way that they approach public engagement when it comes to City Council sessions.

Citing a lack of interest from the public in providing for agenda items for the Committee of the Whole Session for the September 11th City Council Session, City Hall has posted a notice advising that this element of the council process (and one that hosts the only portion of that monthly session that offers the opportunity for public comment) has been cancelled for September 11th.

The notice appeared on the City website yesterday with this short notice: 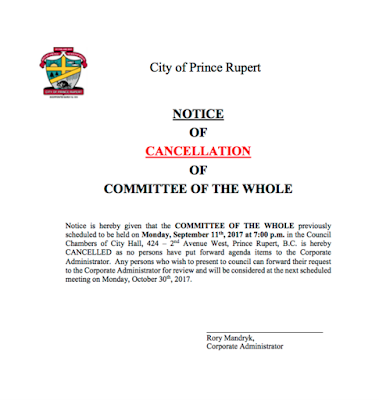 The Committee of the Whole, which is held once a month, also includes an open microphone feature for local governance.

Usually taking place as part of the last Regular Council meeting of the month, it often provides for an opportunity for residents of the city to approach city council during the session to raise issues of concern or interest.

And while the contributions at times are somewhat low with few participants, it does offer the public one of the few opportunities it has to engage on the public record with Council and offer the council members some indication as to what areas of note may be of some resonance to the community.

Recent inquires from members of the public during the August Committee of the whole public comment period included some thoughts and comments as to whether Council should continue to keep the Mayor's salary at full time compensation, a call for more transparency on civic instruments such as CityWest and the Legacy Corporation, as well as commentary on the level of staffing for the city's RCMP detachment.

You can review some of the other themes raised by the public during those monthly sessions through our City Council Timeline feature which can be found as part of our archive for each of the council sessions held through the year.

A review of the list of the City of Prince Rupert Notices to the public since this current council took offices, shows no other instance where Council has cancelled the community engagement process owing to a lack of interest in providing a heads up for the Agenda.

Council members have however cancelled other public sessions this year, eliminating the January 23rd meeting which also included the community comment access provided by the Committee of the Whole session.

They also chose not to hold a Regular Council session on March 30th.

The move to exclude a public comment session from this month's agenda is also a puzzling decision for a council that has made a lot of commentary in recent months about how it wishes to seek more engagement with the community, not to mention Council's frequent talking points that indicate an ongoing dedication towards transparency and accountability.

Those themes were explored as recently as May of this year, when Councillor Blair Mirau began a discussion on the Closed meeting process and the frequency which those meetings are held.

In response to those inquiries, Council members further explored the subject as part of the May 23rd Council session though no tangible decisions were reached at that time, with little in the way of comment to the topic coming from much of the council collective.

It will be interesting to see how Mr. Mirau and his fellow council members explain this latest decision to eliminate yet another public engagement opportunity for the public and if the Mayor and his six council members might not observe that it's somewhat counter-productive to their previous themes of welcoming the opinion of the public.

The Regular Council session for September 11th, which does not allow for public comment on issues will take place as scheduled, with the Agenda for the meeting now available on the city website.

Also released yesterday by Council was another notice advising that Council would be meeting behind closed doors, something which they have done in a regular fashion for much of the last few years.

The September 11th meeting to be held at 5PM will be closed to the public, with the city's notice advising that discussion will involve "the acquisition, disposition or expropriation of land or improvements, if the council considers the disclosure could reasonably be expected to harm the interests of the municipality." 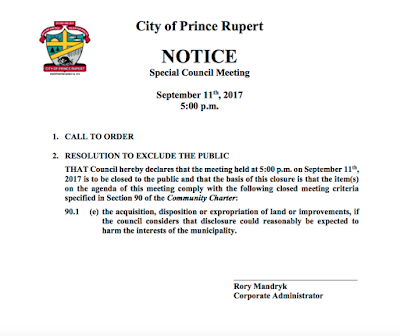 The September 11th Closed session will mark the fifteenth time that Council has closed a meeting to the public this year.

For more items related to Prince Rupert City Council see our past archives here, a review of Discussion points raised during those sessions can be found here.
Posted by . at 9:12 AM

Email ThisBlogThis!Share to TwitterShare to FacebookShare to Pinterest
Labels: Council cancels Committee of the Whole and its open comment period for September 11