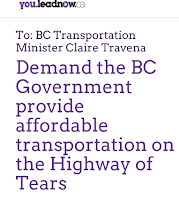 As Greyhound Canada announces its plans to apply to stop serving communities along the Highway 16 corridor, a number of groups are pushing forward with their efforts to keep the issue high on the list of the provincial government.

Earlier today we noted the approach that the North Coast Transition Society is taking, urging residents to contact Greyhound directly to express their concern at their plans.

Locally, another initiative that has just been launched is a petition campaign touted by Prince Rupert educator Joanna Larson, with the one time candidate for the nomination of the North Coast NDP, recently posting a link to the local petition on the you.leadnow.ca portal through her twitter feed. 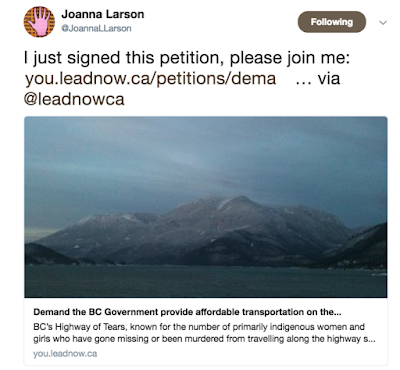 The petition push is designed to increase the options for travellers along Highway 16 and is directed to the British Columbia Transportation Minister Clair Travena.

The local initiative is calling on the minister to immediately put in place recommendations Number 1 and 4 from the Highway of Tears Symposium of June 16, 2016.

A call for a shuttle bus transportation system to be established between each town and city located along the entire length of Highway 16, defined as the "Highway of Tears"

As well, the recommendation included a request that the Greyhound Bus Company's 'free ride' program be expanded  and target marketed to the population in the highway 16 corridor who fit the victim profile.

What impact the petition can have on the provincial transportation initiative is unclear however.

As we've noted in the past. Back in December of 2016 the local stakeholders on the North Coast, including the City of Prince Rupert originally turned down the opportunity to participate in that shuttle bus service that is now in place across most of Northern BC, preferring instead to take a more local approach to transportation concerns in the region.

With Greyhound set to make their case for the Passenger Transportation Board, local officials may have to review their position on that transportation plan.

Adding the City of Prince Rupert and the local stakeholders to the list of those that the petition is directed towards, might help offer some feedback for them as to the level of concern in the community.

You can learn more about Ms. Larson's Lead Now campaign and participate in it here.

More background on issues related to highway 16 can be found from our archive page.
Posted by . at 10:16 AM

Email ThisBlogThis!Share to TwitterShare to FacebookShare to Pinterest
Labels: North coast petition on transportation on Highway 16