So far there have been few details of a Sunday morning industrial incident at the Fairview Container Terminal, with the result of the events such that the Terminal has been closed to operations with no indication offered up as to when container movements will resume.

While Port officials and operations officials at Fairview have as of yet not provided for any public information on the incident through their usual communication channels (here, here or here), the CBC has been able to piece together a few snippets of information on the events of the day for the public with this report, providing the only background piece available through the media so far to the morning incident.

From their notes, they have confirmed from Northern Health officials that four workers from the Terminal were taken to hospital this morning and released not too much later after their arrival.

The only indication as to the nature of the incident comes through a somewhat cryptic observation from Port Spokesperson Caroline Keddy, who offered up few details on the day's events, other than to explain that there is currently  no spill at the moment and that the events are considered to be just an incident.

No indication as to what the port was dealing with as part of the incident were provided, with the scope of the area that was reportedly affected contained to the port land and property.

The Port's Director of Corporate communications also advised the CBC that she hoped to learn more from terminal operator DP World, though to this point, DP World has had no information to share related to the incident provided through their website or twitter feed.

Robert Ashton, President of ILWU the union which represents workers at the terminal, also could shed little background on the incident for the CBC, noting that he did not know the nature of the incident, other than the workers are fine and had been released from hospital.

He also advised that an investigation is currently underway and noted that the terminal is shut down for the time being, with no ILWU members running the facility at this time.

According to the Port's Vessel Report for September 3rd, the Cosco Thailand is currently tied up at Fairview, having arrived just after midnight,  with a scheduled departure date of September 6th. The next vessel to arrive in port is the Northern Magnitude from the Maersk line, it is scheduled to arrive a Fairview on Tuesday evening at 9 PM. 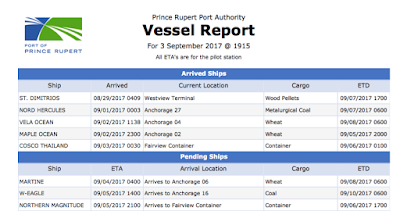 What impact the closure of operations has on that timeline for movements has not been outlined to this point by DP World officials.

Considering the interest of the public in events related to the Port and any potential impact that that those operations have on the community, both the Port and DP World may want to offer up a bit more in the way of background information over the course of the next few days.

Both organizations could take advantage of their communication structures in place to give residents of the city some indication as to the circumstances of the days events from Sunday and what steps have been taken to address the incident.

We will update this page, should the Port or DP World provide any background to the incident.

Mid morning on Monday, the Port of Prince Rupert provided a bit more detail to the events of Sunday at the Fairview Terminal, posting an update through the Port's Facebook page and twitter feed.

According to this item relayed through the industrial news portal Port Strategy, 11 workers were injured as part of the Sunday incident

In addition to the short synopsis of events, the Port also advised that the terminal is set to return to normal operations after the Labour Day holiday. 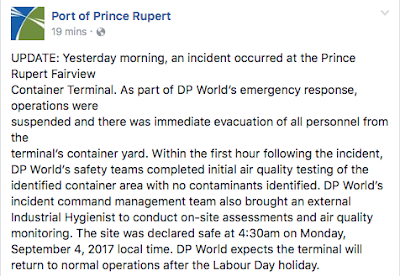