On the day set aside to salute the labour movement across Canada, Prince Rupert Mayor Lee Brain has taken to his Facebook page to offer up his own tribute to the local city work force, celebrating both their work on behalf of the City of Prince Rupert and the volunteer spirit that many city workers offer to the community.

The update makes note of the tireless work performed by city workers to deliver the quality of life that Prince Rupert residents deserve, recounting how those workers frequently are tasked to their duties in inclement weather.

For this Labour Day 2017, the Mayor called on the public to show their support for their civic work force through the social media message. 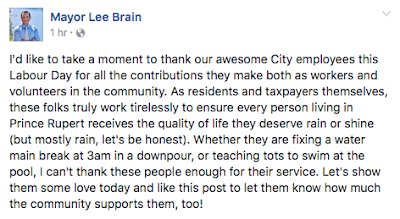 You can review the Mayors Social media stream here.

For more items of interest on civic Labour themes and issues in Prince Rupert see our archive page here.

Mayor Brain was not the only local official to pay tribute to working men and women this weekend.

North Coast MLA Jennifer Rice offered up her own salute to BC workers with an entry to her Constituency page. 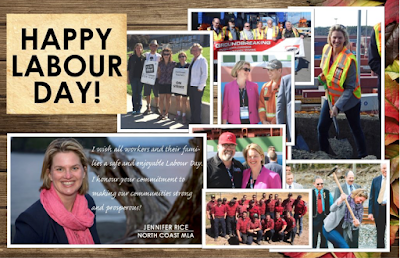 Premier John Horgan provided for the official message from BC's NDP Government, with this statement that recognized "the hard working people of British Columbia who built this province from the ground up"

However, NDP MP Nathan Cullen seems to have let the annual celebration of the labour movement slip through his social media messaging so far today, with no notes posted to this point to his constituency or Facebook portals, or through his twitter stream.