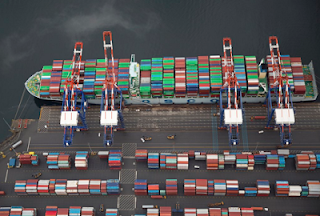 It took until mid-day Monday for residents of the North Coast to learn even a few details about an industrial incident that took place at the Fairview Container terminal on Sunday morning.

We first made note of the incident on Sunday evening though it was an update that had but a few details readily available.

From the time that the first alert as to the incident came out on Sunday, more than 24 hours had passed before the Prince Rupert Port Authority outlined some larger background of the events of the Sunday morning incident, using a Facebook post released at mid-morning on Monday to provide the background to the incident.

Through the short information note, the port's communications department outlined how as the incident evolved, DP World, the port operator instituted its immediate evacuation protocol at the terminal, evacuating all personnel from the container yard.

From that point, DP World's Safety teams began an air quality testing program at the site within the first hour of the incident, testing an identified container area to determine that no contaminants had been identified.

In addition to the local safety team, DP World's incident command management team also brought an external Industrial Hygienist onto the Fairview site to conduct assessments and continue with on air monitoring.

The advisory further noted that the site had been declared safe as of 4:30 AM on Monday morning, with a return to normal operations set for after the Labour Day holiday had come to an end.

The full notice from the Port of Prince Rupert can be reviewed here.

Not mentioned as part of the port's release however, were further notes related to injuries suffered during the course of the incident.

The early report of Sunday from the Port had noted that three workers had been taken to Prince Rupert hospital, however a follow up item from an industrial news site noted that up to 11 workers had required some form of attention as part of the Sunday incident.

As well, there was no indication from the information reports as to whether the City of Prince Rupert and other governments of the area had been advised of the ongoing incident on the Terminal property.

If those government officials had been contacted and advised of the events, they had seemingly had nothing to share for their residents through their own communication options over the course of the weekend.

While a long weekend is perhaps not the most opportune moment for full information from the Port and its partners, considering the serious nature of the incident and any potential impact on areas surrounding the container terminal, the community could reasonably be expected to have heard from them with much more detail, long before the eventual Monday update.

With such an expansive collection of corporate and social media sites now available to Port officials to share information, making use of those options in just such an situation as an incident at any of the Port facilities should be the primary focus of their communications team.

Those various information portals can serve much more of a purpose than just the opportunity to share the frequently delivered positive news from the Port. Such information options can also be instrumental, if not reassuring, in keeping the community informed on the details of more serious matters and incidents as well.

This weekend with an inconsistent response, the port didn't really serve the community particularly well on those counts.

More notes related to Fairivew Terminal can be found here, while an overview of items of note from the Port of Prince Rupert is available here.
Posted by . at 8:42 AM