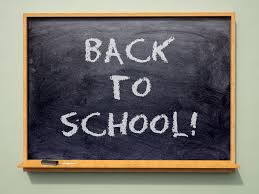 The Labour Day weekend now behind us, the old familiar rituals are back in motion, as parents and students prepare for another school year on the North Coast.

Today is the first day of school, a short day for all as students and teachers get acquainted at schools across the District, with the first full day of classroom instruction to take place tomorrow.

An update on the first day of school routine is available from the SD52 website here.

With the return to classes, drivers are reminded that School Zone speed limits now go into effect and members of the Prince Rupert detachment will be keeping an eye on motorists in the city and Port Edward as the start of the school year goes into motion.

Another year of education also means a return to the education files for local and regional politicians.

September brings  forward a new session ahead for elected members of the School District 52 Board, they will host their first meeting of the year on September 12th.


No agenda items have been published to the District website as of yet, but one item that they may wish to provide some clarification for parents on, is the status of the still unfilled board seat, last occupied by former trustee Judy Carlick-Pearson.

She relinquished that position in November of 2015, and at that time plans were announced to set in motion the process for a potential by election for the post, but as the months and now years moved forward, those discussions never seemed to move much past the discussion phase.

Since the departure of Ms. Carlick-Pearson the School Board has continued to operate down one member, with little mention, let alone explanation from Board officials over the last year as to how they plan to address the issue.

The next general voting opportunity for the School Board positions is not until the fall of 2018 when municipal elections are held across the province, if the School District decides to wait until that period of time, a full three years will have elapsed without a full contingent sitting on the Board.

The new school year will also provide North Coast MLA Jennifer Rice to follow up on her past efforts to deliver a new Middle School for the District.

As we noted on the blog back in August, shortly after the NDP took power in Victoria, the middle school project could prove to be the first major test for the MLA when it comes to delivering for the riding as part of John Horgan's government.

More background on education in the Northwest can be found here.

Email ThisBlogThis!Share to TwitterShare to FacebookShare to Pinterest
Labels: School back in session across NW BC