Reaction is starting to build across the Northwest with word that Greyhound has made an application to cease travel along a number of Northern British Columbia routes, including the Prince Rupert to Prince George option along the Highway 16 corridor.

Friday, we outlined the commentary that had been heard from North Coast MLA Jennifer Rice, as well as the Mayors of Terrace and Smithers, two of the many communities that will affected by the Greyhound move should it be approved.

Locally, the Transition Society has taken the lead on the issue, posting a short commentary about the Greyhound application and urging residents of the region to contact Greyhound with their comments and concerns. 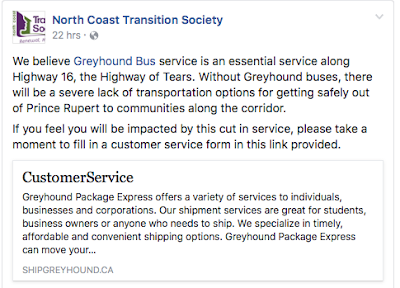 Access to the Customer Service form at Greyhound can be found here.

When it comes to transportation arrangements on the North Coast, the Transition Society and the various local governments in the region have taken a significantly different path than that that which many other communities across the Northwest have developed.

In December of 2016, the City and its regional stakeholders turned down the opportunity to join in with the regional shuttle bus program that was launched by the province over the last year and a half, instead focusing on their own local solutions when it comes to transportation for those with limited means and at potential risk.

Speaking to the CBC over the weekend, Mayor Brain delivered his only public comment to this point on the Greyhound announcement. Observing  that he will be reaching out to the province and Greyhound officials to discuss options.

"We need to ensure that there's a continuous link from Prince Rupert to Prince George," Brain said. "I'll be reaching out to [Greyhound] to discuss options, and reach out to the province, as well."

Some background information on that shuttle service that the city may soon give thought to reconsidering can be found below, with items taking us back to mid June of 2016 when the service was announced by the Province:

More items of interest related to the potential end of Greyhound Service along Highway 16 corridor, as well as other corridor transportation issues can be found here.
Posted by . at 9:00 AM

Email ThisBlogThis!Share to TwitterShare to FacebookShare to Pinterest
Labels: Reaction to proposed Greyhound service cuts across Northern BC