It's been a busy week for celebrations at the Port of Prince Rupert, earlier this week the Port and its partners cut the ribbon on the Fairview Terminal Expansion, which will boost the opportunity for throughput out of the container port to 1.3 million TEU's.

And while much of the attention was focused on Fairview and the growing footprint it has on the Prince Rupert waterfront, the ribbon cutting scissors got another workout on Tuesday.

That as assembled dignitaries took part in the official opening of the new Ray-Mont Grain Terminal located on the south side of Ridley island as part of the Port's Ridley Island, Road, Rail and Utility Corridor.

The Ray-Mont facility in 10 acres in size and includes a 100 car rail loop corridor, grain dumper pit as well as what is described as a state of the art conveyance system that will transload grain from CN rail hoppers to containers for export shipment.

As it opens for business, the Ray-Mont terminal is the only unit train stuffing facility on the west coast of Canada.

Shipments arriving by rail in Prince Rupert will include grains, cereals and pulses from terminals located across Canada and the United States.

As part of the Tuesday ceremony, Charles Raymond, the President and CEO of Ray-Mont was joined by Port officials, as well as representatives from transportation partners and area First Nations in cutting the ribbon to officially open the terminal for business.

As part of his comments, the Ray-Mont CEO  offered up an optimistic outlook on the future for his company, the Port and the community as the Prince Rupert facility prepares for the upcoming crop year and the opportunity to put the Ridley Island terminal into full production.

Now that it is open, the first customer to make use of the Prince Rupert terminal will be Agrocorp processing, which is one of the largest  trading houses in the world, offering up a combined export capacity of over 500,000 metric tonnes.

The newest industrial group to locate in Prince Rupert recently started hiring staff for the upcoming fall shipping season, as part of that quest for employees they hosted a hiring fair, an event that put a focus on job opportunities for First Nations residents in the community.

CN Rail has hailed the opening as another key element for its transportation system across Canada, sharing photos of this week's Grand Opening event and offering information snapshots through their twitter feed. 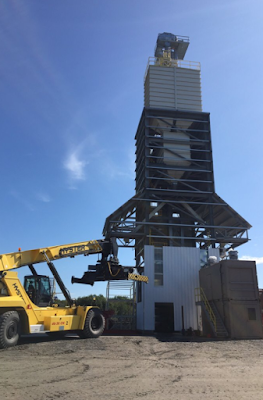 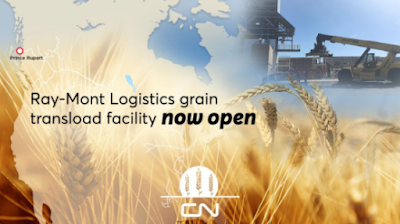 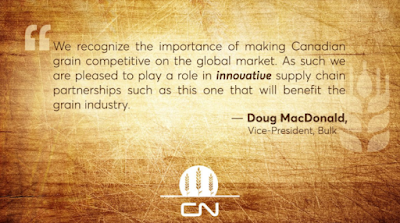 CN also provided this overview of the scope of the project and what impact it will have in delivering Canadian crops to the world.

For more items related to the Ray-Mont facility see our archive page here.