Some more background related to a proposed marine fuel terminal for Prince Rupert has been released by the the project proponent Wolverine Terminals, with the Alberta company promising what is described as a game changer for Port operations on the North Coast.

The project which would service the ocean going vessels that call on Port of Prince Rupert facilities would make use of a rail supply to the terminal location proposed for just west of the Pinnacle Pellet plant.

If the proposal is approved fuel would arrive through CN's northern corridor to be delivered to vessels from a barge style terminal.

The rail cars would arrive at the Aquatrain terminal on the waterfront and then be transferred to a rail barge which would be transported by tug to the fuel mooring site some 400 metres from the Aquatrain site.

The Marine fuel would then be transferred from the rail cars to fuel storage tanks located within the rail barge and then to the fuel distribution barge which would service the large cargo vessels that call on the Port.

More on that process can be reviewed here.

Citing the most recent statistics of 461 vessel calls in 2016 for Prince Rupert and the prospect of significant growth ahead, Wolverine President Serge Bisson observed that the project would make Prince Rupert a full service port

“With the introduction of marine fueling operations, the Port of Prince Rupert will become a full service port capable of supporting capacity for growth. It really is a game-changer for Port operations, ...

For decades, fueling facilities at the Port of Prince Rupert have been contemplated but never achieved due to economics,”  ... “While the demand for fuel is substantial, it was below the economic threshold of the facilities required.

Our company has developed the technology and processes to safely and efficiently provide on-site fueling capacity at current volumes in Prince Rupert.”

The Calgary based company is currently conducting an environmental effects evaluation for their proposed storage location along Prince Rupert's inner harbour, as well as to engage with area First Nations and other stakeholders as part of their regulatory approval application to the Port of Prince Rupert.

Plans are in the works for further consultation with the community including an open house event to further outline their plan to become part of the Prince Rupert industrial sector.

As part of the community engagement related to the proposal, Wolverine offered up the following benchmarks moving forward.

Providing regular information to the public regarding the proposed Project in a timely and effective manner;

Providing information through a variety of methods in a way that is a consistent, straightforward and easy to understand;

Facilitating meaningful engagement opportunities and dialogue with the public, including opportunities to provide feedback and address potential concerns;

Demonstrating to regulators and to the public how their input, issues and concerns are being addressed and integrated into the Project;

Supporting respectful public relationships throughout the lifecycle of the Project.

The two streams of public engagement are expanded on below:


A proposed Project schedule for the development looks as follows: 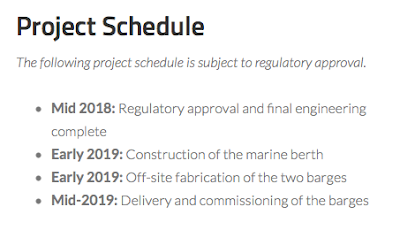 Previous to the Wolverine announcement the prospect of marine fuelling on the North Coast was not considered to be an economical pursuit and one of the reasons that the service has not been offered in the past.

Wolverine notes that by making use of the latest in marine fuelling technology along with the ability to bring fuel into Prince Rupert along the CN corridor, they would be able to remedy that situation and provide a service that would help reduce the costs for those shipping lines that call on the Port of Prince Rupert.

You can examine  a larger overview of their plans here

More background notes related to Port development on the North Coast can be found on our Port Archive page here.

With the proposal now moving to a more active phase, we have also created a stand alone archive page for future notes related to the Wolverine proposal, you can find that archive here.