What will be an extensive network of seismic sensors along the BC coast was officially made operational on Monday as a Federal-Provincial partnership initiative was introduced to the public.

North Coast MLA Jennifer Rice, in her role as Provincial Parliamentary Secretary for Emergency Preparedness was on hand for the official launch of the project and observed how the project will aid in provincial preparedness for future seismic events.

“The potential for a major earthquake to hit in this region of the country is very real and makes this an ideal location for the first sensor in the national Earthquake Early Warning network. By putting this early warning system in place, we’ll greatly improve our preparedness and response to earthquakes in the future.” --   Jennifer Rice British Columbia Parliamentary Secretary for Emergency Preparedness

Towards the project which is led by Canada's National Resources Canada office the outline looks as follows:

Building on NRCan’s long history as the authoritative source for earthquake information for Canada, NRCan’s EEW system will provide notification of earthquakes through a network of sensors and alerting systems for at-risk areas around the country.

The EEW system provides seconds to tens of seconds of notice before strong shaking starts, warnings that can help reduce injuries, deaths and property losses. It will be used to generate alerts for critical infrastructure, industry and the public, helping to protect people, communities, infrastructure, and the environment during an event where every second counts. 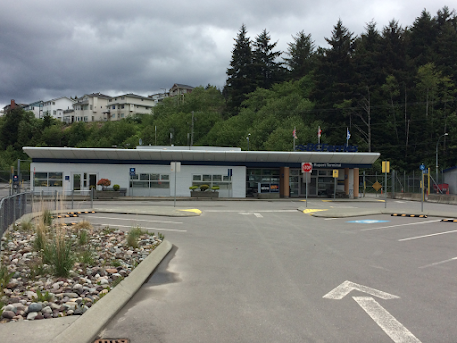 BC Ferries President and CEO Mark Collins dropped a hint as to where we may see future seismic sensors on the North Coast and Haida Gwaii as part of his comments for Monday's announcement.

“Earthquake preparedness is an important part of our emergency response planning, given the critical role BC Ferries would play to connect communities along coastal British Columbia following a major earthquake. Being selected as the first early warning site for the national system echoes our commitment to safety, and we look forward to expanding the system at other strategic terminal locations along coastal British Columbia.”

The full national system is expected to be online in 2024 and when complete more than 10 million people in Canada living in the most earthquake-prone regions of the country will receive Earthquake Early Warning alerts.

The full overview of the project can be explored here.
Further notes on the work of Ms. Rice at the Legislature is available here.
Posted by . at 12:05 PM