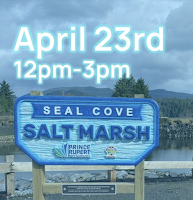 Prince Rupert residents and any visitors to the community in late April are being asked to put aside a few hours on April 23rd to join in on the celebration of the Grand Opening for the Seal Cove Salt Marsh.

The site itself has been open to the public for a while now with many residents taking to the trail that loops the marsh and serves as a new centrepiece for the Seal Cove area.

The invites went out by Social Media today, with the City noting of the family-friendly fun event that will put a focus on environmental sustainability.

The event will run from Noon to 3PM on April 23.

Among some of the activities planned for next month include:

On-site yoga (weather permitting)
Interpretive information on local wildlife
Guided tours of the Salt Marsh
Crafting with Upcycled Materials
Pick up a seedling to plant at home
As part of the day, residents/visitors are also being asked to bring your ‘non recyclable’ items including - Hasbro toys, cigarettes, vape pens (cartridges/pods), Brita filters, baby food squeeze packs, nespresso pods, toothbrushes, and coffee bags -
As part of the event, Transition Prince Rupert will be collecting them.
A reminder for those that may attend, parking is limited at the Curling Club and Seal Cove Road parking area, so Transit is a recommended option, or a walk along the Rushbrook Trail to the site.
Learn more about the event and who will be participating here.

You can take a look back at the evolution of the project from our 2030 Vision Plan Tracker archive here.