City Council asked to be advocates for Fairview Vessel owners


Councillor Barry Cunningham has asked that City Council take some time to write a letter to the Port Edward Harbour Authority, relaying the concerns of vessel owners berthed at the Fairview Floats of potential changes to the westside waterfront harbour area.

Speaking Monday night at the Prince Rupert Council session, the Councillor outlined how some proposed changes in the immediate area could impact on the long established fishing fleet for the city.

"Probably not a lot the city can't do about it, but the south finger at Fairview, the city is talking about expanding and you've got a lot of working boats there, draggers, big seiners and that. And there's quite a concern about if they're going to be getting kicked out, if and where they can go.

So possibly, I don't know we can have staff send a letter to Port Ed Harbour Authority to find out if they have an alternate plan or anything for it, because these are boats that are too big to just tie up at the yacht club or that, you know they're up to 120 - 150 feet.

They have been the backbone of the fishing industry in this town for years and years and they're still supplying a lot of jobs. So it's something,  you know there's not a lot we can do about it officially, but at least we can send a letter to Port Ed Harbour Authority to see if they're going to come up with extra moorage in Rushbrook or something for that place"

Mayor Brain concurred that it would be a good idea to contact the Small Craft Harbour authority on the topic.

Mr. Cunningham did however mis-identify the proponent for changes at the Fairview Floats, which is not the City of Prince Rupert, but rather DP World and the Prince Rupert Port Authority which recently outlined its expansion plan for that immediate area. 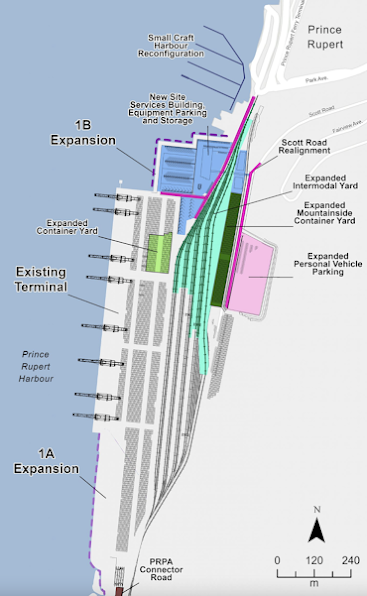 Known as the Fairview Facility Project 1B, the element that the local fishing fleet is concerned about involves the relocation of the existing small craft harbour and infrastructure in the direction of the area of the Prince Rupert Airport Ferry side of the Harbour.

You can review more on that project from our blog item of March 3rd.

The process is currently in the public participation phase, with opportunity to comment now available here.

The comment period comes to an end on April 4th.

The City has yet to post the video of Monday's Council session to their YouTube archive page, once they do we will include the video to allow for a review of the request to Council.

Update: The City posted they video to their archive on March 23rd. The theme of Fairview Floats came up at the 1 Hour Thirty two minute mark

More notes on Council themes can be explored through our Council Discussion Archive.

An overview of fishery themes in the region is available from our archive page here.