There's a huge absence on the American political scene this week with word of the passing of the long serving Alaskan Congressman Don Young,

Skeena-Bulkley Valley MP Taylor Bachrach noted of the congressman's passing on Friday through his social media feed, observing of his recent meeting with Mr. Young as part of his recent trip to the US Capital in Washington.

While many in Prince Rupert and the northwest may not have known much of the Congressman, or followed his work in Congress extensively, his efforts on behalf of the state of Alaska have had some impact on British Columbia and Canada over the years.

Whether it be Alaska Ferry related issues, cruise ship themes or the fishery to name a few, Young was a strong advocate for his state and was always brought an Alaska First mindset.

Owing to its population, Alaska only has one Congressman for representation in Congress so the clout of the Alaskan politician was large, working in concert with the states two Senators.

Both Senators Lisa Murkowski and  Dan Sullivan shared their own notes of the Congressman's  passing. 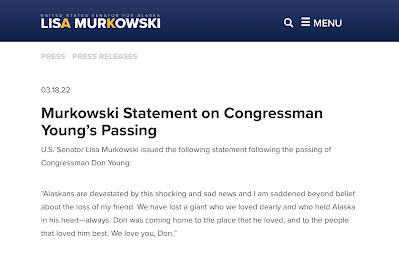 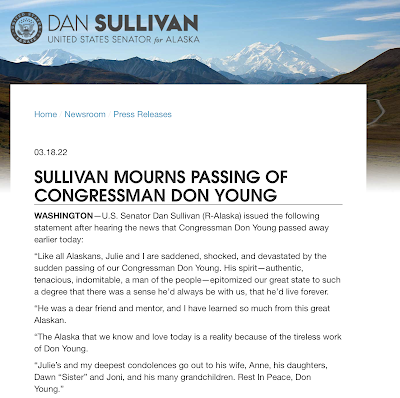