100 Years of the Library in Prince Rupert

It's a celebration year for Prince Rupert's House of Reading, with the Prince Rupert Public Library celebrating its 100th birthday in 2022, the City Council of the day on March 22nd 1922 having set forward the creation of the service to the community. 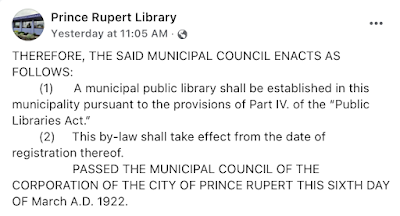 Since that day, the Prince Rupert Library has become an integral part of the community, the beacon for knowledge and research for many a student through the decades, a place of quiet refuge from the noise of the day for others.

Over the years, many a plan has been put forward to find a new home for the Library, one just two decades ago offering up the ambitious prospect of a marine theme in a Book Boat way back in 2002.

Though like some of the other proposals, all have long since been put aside into the what could have been files as part of our recent past of financial challenges in Prince Rupert.

Still, the Sixth Avenue facility of today, despite the many challenges of late for the building, continues its great work for the community. And with the Big 100 now underway, many a celebration of note is sure to come through the year.

The City had issued an RFP in January to review the state of affairs for a number of city owned structures, including the Library, though no results from that initiative have been released by the city as of yet.

Mind you, there probably isn't much of a need for a study to determine that  it's clearly time for some kind of movement towards a new facility for the Library.

Of note in this Civic budget review period underway at the moment, is the lack of any plans to move forward towards a new venue for the Library, despite a budget presentation with some ambition.

A curious oversight considering many of the other vision making projects and property planning that the city council members have embarked  on over the course of their current term of office.

Something that faithful patrons may want to raise with City Council members over the next month of consultations, perhaps as part of their birthday presents towards the services provided by the Library.