With surrounding residents in strong opposition, the tide shifted for the proponents of a large home proposed for the Atlin Avenue area, with the project now sidelined after the city's planning department amended their view of the proposed development to recommend rejection by Council. 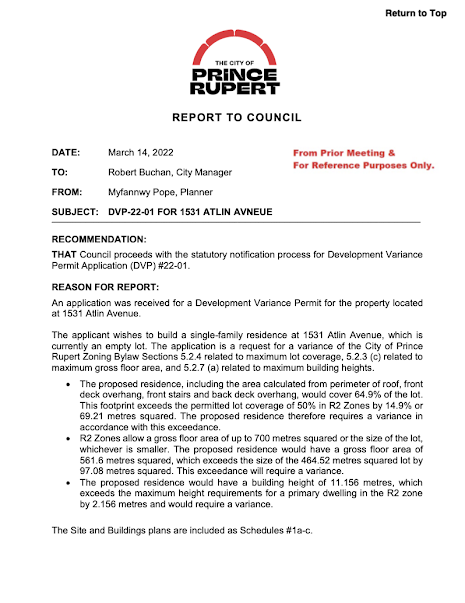 It was the second look for council at the proposed housing plans, the first coming two weeks ago as part of their March 14th  session which sent the process forward to public notification.

However once to that process, the main push towards rejection for the required variance came from what was a large response from those in the surrounding neighbourhood, who by the time the issue came back to council had submitted four letters in opposition and a petition signed by 12 area residents speaking against the house build as proposed.

"Therefore given these identifying negative impacts we are amending our recommendation to not supporting the variance"-- Myfannwy Pope, on the city planning staff recommendation for a property on Atlin

Councillor Nick Adey was the first to comment, he applauded the public notification process that delivered the input from the community and noted of the role it played in the decision making in this instance.

."A tip of the hat to the public notification process and why it matters, we often find ourselves kind of scrolling through these things and there's a sort of a routine around it.

And I'm never one to particularly opposed sending something as far as a public notification.

But I think t's important to recognize that, that part of the process can make a difference, as based on your changing the recommendation, this one clearly has"

Councillor Niesh also spoke to the issue, noting of the slippery slope that the variance request had presented to the City
"As I had stated at the last meeting, it's a slippery slope to go down when you start accepting height variances of this sort of nature ... this particular one if you look at it ... it's so high and it's already above street grade and you start putting almost a forty foot tall building above street grade, it becomes very impactful for a lot of people.
I definitely think in the future ... I really disagree with these completely, I mean, I just think that it can really affect a lot of people by doing this ...
I don't like to see things that are just such monsters in neighbourhoods that are so impactful to everyone around them and so not fitting to the neighbourhood that you know we just really have to watch that in the future.
And I'm really glad to see that people in the neighbourhood really spoke up to say what they wanted to say and I'm glad to see that the planning department has changed their recommendation "
Councillor Randhawa also noted that there should be no impact on the quality of life of those in the area.
Council then voted to reject the Variance request for the property on Atlin.
The approach that Council took on the Atlin property variance request will more than likely catch the ey of those on Edwards Avenue over on the city's east side, they had their own concerns towards a large scale housing proposal from last year.
However that was one consultation with the public that did not deliver the same result for them, as was provided for the Atlin area residents on Monday.
Council's review of the file can be viewed fro the City's Video Archive, starting at the 34 minute mark.
Further notes on Monday's Council session can be reviewed from our Council Timeline.
Past items on housing themes can be explored here.
Posted by . at 11:32 AM