The TV audience from the Northwest for tonight's Canucks/Blues game, as the Vancouver club puts the emphasis on all things Indigenous this evening; hosting First Nations Night at Rogers Arena, an evening that should be well received across British Columbia among some of their most passionate fans.

The evening, which marks the fourth annual First Nations Night will feature a mix of cultural and musical themes, along with a number of special guests, some of theme familiar for fans of Canuck's teams of the past. 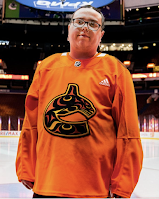 Prior to the game withe the St. Louis Blues, the Canucks  will take to the pregame warmup in a special jersey created for the evening.

The warm up jersey was designed by Musqueam artist Chase Gray, a Musqueam and Tsimshian artist.

Included as part of the jersey will be a shoulder patch to put the spotlight on the victims and survivors of Residential Schools through the words Every Child Matters.

You can learn more about the artist and his work here. 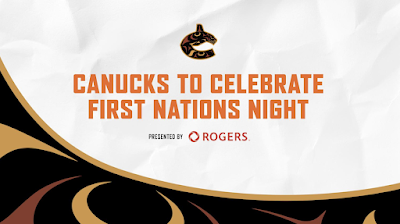 Among some of the pre-game celebrations on the evening include:

More on tonights celebration can be reviewed here.