Premier John Horgan and Public Safety Minister Mike Farnworth hosted a Friday morning information session that outlined the BC Government's approach to providing for a bit of relief at the pump for British Columbia motorists.

The one time relief rebate will be $110 and will be forwarded to ICBC customers who are personal drivers, and $165 for commercial customers to ease the financial burden of rising gas prices, with the Premier noting of the current war against Ukraine by Russia as the main contributor to the spiralling upwards prices. 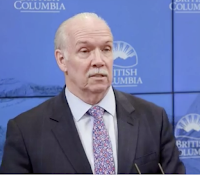 “People are facing increased costs through no fault of their own, but as a chain reaction that started with Putin’s illegal war in Ukraine. As a result of our work to fix ICBC, we’re in a position to put money back in people’s pockets to help a little with these increased costs.”
Eligible ICBC customers can expect to receive their rebate in May if they are registered for direct deposit with ICBC or as a refund to their credit card. All other customers will receive cheques in June.
As to why he chose the ICBC route over tax decreases the Premier outlined the government's thoughts on the two options.
"I think the public needs to know, that the amount of money that they pay in taxes at the pump, is on the pump when they pull up. You know every time you fill up what portion is going to Translink if you live in the Lower Mainland. what portion is going to BC Transit if you live outside of the Lower mainland and in areas where public transit is provided.
And you also know that the amount that we pay for carbon taxes here in British Columbia go right back to people and to business to drive down emissions, by ensuring that we can do retro fit programs and other initiatives to make life more affordable and reduce our impact on the environment.
We were reluctant and in fact wold not amend the taxation, because it would just be filled by an increase in prices at the pump. And we saw that in Alberta where the government promised a thirteen cent tax reduction on a Monday and on a Wednesday the price went up fourteen cents.
We believe this is the best way to get money into people's pockets" -- Premier John Horgan at this mornings information session
Mr. Farnworth observed as to how ICBC was the vehicle of choice for the government owing to its annual net income of $1.9 billion for the fiscal year ending March 31, 2022
“This rebate is going to help a lot of people in this province. This is another opportunity to put money back in the pockets of the hardworking people who make this province a great place to live.”
More on the government announcement can be reviewed here. 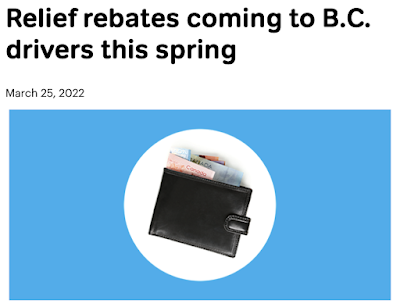 A wider overview of the relief rebate program can be explored through the ICBC website.
The full press conference is available for review below:

As we have been tracking on the blog over the last few weeks, the price of gas at local stations began its rise roughly four weeks ago, as the Russian attack on Ukraine began.
At that time the price point was around the 1.52.9 mark, as the month has moved forward the high point so far has been set at $1.99.9 per litre, which is where the price point is currently listed for most of the stations in town.
More on the gas price rise is available through our Commercial Sector archive.
Further notes on the provincial political scene can be found from our Legislature archive, as well as part of our political blog D'Arcy McGee.
Posted by . at 2:55 PM