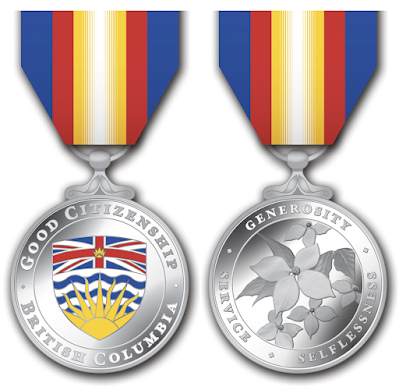 A pair of residents from Haida Gwaii will be receiving provincial honours next week part of the 2022 salute to those who are being honoured with the Medal of Good Citizenship, with a focus on how they contributed to helping their communities through COVID.

The Bayview Market has operated for more than 60 years as a local grocer in rural and remote Port Clements, Haida Gwaii. Beverly Lore was an employee when she purchased the store in 2008 because she wanted to keep it locally owned and operated. This personal dedication to community has meant that the Bayview is not just a grocery store, but the hub of the community.
“We are proud to honour these British Columbians who have demonstrated themselves to be extraordinary individuals,” said Premier John Horgan. “Each one of them has been singled out by their peers for their tremendous generosity, kindness and selfless acts of service during one of the most challenging times in our province and around the world.” -- Premier John Horgan
The biographies of both Haida Gwaiians can be reviewed below, they are the only two recipients to be noted west of Prince George:
All of the recipients brought stories of inspiration through COVID times for the province, with perhaps the most well known of the thirty two Doctor Bonnie Henry, who was awarded her Medal of Good Citizenship for her work during our COVID response.
Learn more about all of this years Award recipients here.
More notes on Provincial themes can be explored from our Legislature archive.
Posted by . at 3:50 PM