The final games for Minor hockey  came over the weekend, a chance for some farewells to the season for the players on Sunday and plans for the AGM still ahead made for the final week of play for Prince Rupert Minor hockey.

The ice is coming out with the All Native Basketball Tournament on the way for April and as the Civic Centre staff made their plans for the big thaw, officials at the PRMHA were celebrating another year of competition and fun on the ice in Prince Rupert and on the road.

The PRMHA Facebook page provided the wrap up to the hockey season over the weekend, with a look at the last tournament of the year with Atoms playing host. 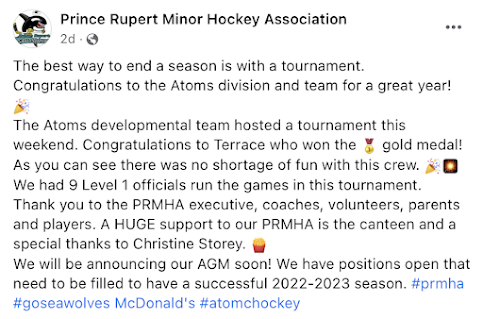 The final medals of the season went the way of the tourney winning Terrace team. Also joining the Seawolves in weekend Atom play were teams from Smithers and Kitimat

Hitting the ice in the last week with the players of the Under 7 division  were members of the Prince Rupert Rampage who handed out their medallions for play this year.

You can review the full year of access for the Seawolves at all levels from the PRMHA Social Media feed here.

Up next will be the Annual General meeting with a date still to be determined, that session will look to fill some open positions and chart the course ahead for 2022-23 and beyond.

More notes on Minor Hockey across the Northwest can be explored from our archive page.