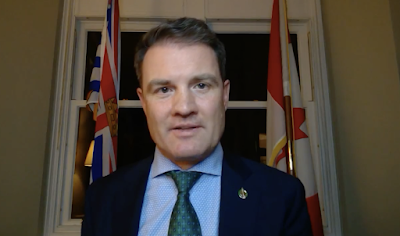 An impromptu video update from Taylor Bachrach provided residents of Skeena-Bulkley Valley with a review of recent developments from Parliament Hill, this week with the region's MP speaking to themes of working together and how he's working to deliver on the wishes of constituents.

The near forty minute Facebook Live presentation covered a range of topics, putting the early focus on Dental Care and Pharmacare, two themes which are in the news this week following the parliamentary arrangement between Bachrach's NDP and the governing Liberals.

"Just recently the NDP was able to use our leverage and our power in the House of Commons, even as the fourth party with 25 seats, to effect some real change that I think is going to help people and relates to the messages that I hear from people all across the Northwest all the time.

And the biggest part of this agreement that we've come to around a series of policy initiative, the biggest part and I think the most significant parts, is a commitment to implement a public dental care program starting right now, starting 2022"

The MP  provided some background to the program, noting how it will be a little different than how our National Health Care is delivered,  highlighting  some of the elements towards it and the timeline of the delivery.

Starting this year, the early focus will be for a Dental Care Program in place by the end of 2022 for children under the age of 12, providing access for the dental care that they need.

In 2023, the program will expand to Seniors, People with Disabilities and to include Youth under age 18.

By 2025 the goal will be to expand the program to everyone in Canada whose family earns less than 90,000 dollars. With a co-pay program in place for those making between $70,000 to $90,000, with the public program covering some of the costs, and families covering the remaining balance.

Those below that 70, 000 dollar threshold will gain free Dental care.

To frame the significance of the program that the NDP have been marking from the agreement with the Liberals, Mr. Bachrach noted of the introduction of Health Care in the sixties which the NDP/CCF of the time had advocated for

"I see this is a continuation of that vision that Tommy Douglas had back in the 1960s, when he really  pioneered Universal Health Care. And his vision was always for it to be from head to toe, to be the complete package"

Towards the commitment on Pharmacare, the MP noted of the need to work with provincial governments on the delivery of the program, noting how the government already has a roadmap through a study that was conducted a few years ago.

Some other themes that Bachrach noted that will come out of the agreement with the Liberals, was a commitment on Clean Energy and climate issues, with training programs and the phasing out of subsidies to energy companies.

When it came to an explanation of the Confidence of Supply agreement, the Skeena-Bulkley Valley MP recounted how the same mechanism was used by the Provincial NDP and the green parties in British Columbia a few years ago that allowed for continuity for government.

Observing on the turbulent times of the pandemic, the Russian aggression in Ukraine and economic challenges he pointed to the agreement as one that will create stability.

"The goal here is to create the stability that allows the government, and us working with them, to implement a number of policy initiatives that are going to make life better for Canadians"

Responding to some questions from those viewing the live stream, the MP provided a review on plans towards Indigenous Housing situations across the Northwest, with a commitment through the agreement to make a significant additional investment into Indigenous housing that will be led by Indigenous, Inuit and Metis communities.

He also highlighted how the agreement offers opportunity to accelerate the Calls for Justice from the Murdered Missing Indigenous Women and Girls National Inquiry, as well as towards further support for Indigenous communities looking to investigate Residential School sites in their areas.

Noting how the success of the agreement will only be delivered by both sides working towards it he outlined the NDP's dedication to keeping the Liberals engaged, while mindful of their past record on such things.

"Obviously this agreement lays out a number of milestones and a number initiatives and it really requires the goodwill of the parties working together to make it a reality. And we're going to work very hard to hold the Liberals to account for those promises in the agreement and to make sure that these components do become reality.

Of a number of questions posed to him in the second half of the presentation, one gave cause for the MP to provide his view as to the NDP's continued role in opposition and determined to hold the government to account.

"We're still an opposition party and there are other parties in the House who want to frame this as, us somehow becoming a part of the government. That is not what is happening, let me be very clear.  We remain an opposition party and we remain committed to holding the government to account, to asking the tough questions. This doesn't obligate us to vote for everything that the government puts forward, we're going to evaluate everything on its merits and act accordingly  representing the people of ridings like Skeena-Bulkley Valley"

To wrap up his livestream, he spoke on rail safety, toxic drugs in Northwest communities and his bill to lower the voting age in Canada.

Bachrach also outlined some of the steps taking place in the northwest towards Ukrainian relocation and assistance to residents of the riding with concerns over the impact of the Russian aggression on their families in Ukraine.

Towards gaining more information he observed that constituents could contact his offices across the Northwest to offer help or gain assistance on their concerns.

You can review the livestream below:

Further follow up conversation on his presentation can be reviewed through the comments section of his post.

More notes on the Ottawa scene can be reviewed from our House of Commons archive.

Further items of interest can be explored through our political blog D'Arcy McGee.