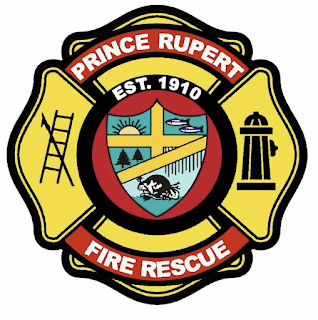 The City of Prince Rupert has introduced plans to add on to the staff level for the city's Fire/Rescue Service, with Chief Financial Officer Corrine Bomben introducing an additional cost of 430,000 dollars towards the initiative, that delivered as part of Monday's Council Session.

While the CFO did not expand on the proposal during her presentation, in follow up notes through the city's Social media feed, the City outlined how the addition of four relief Firefighters was to ensure that the Department has an adequate number of on-duty staff to make entry into structure fires.

We noted of a curiously phrased employment posting back in February, which at the time had the City accepting applications for positions identified as Relief Fire Fighters. 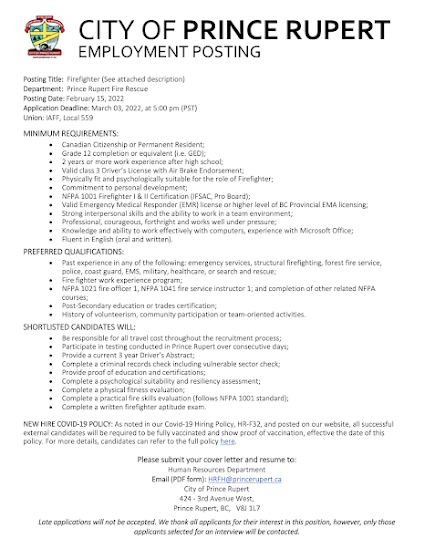 At the time of the job posting,  we noted as to how that shift in focus towards staffing at the Fire Hall was something that the City Council members might want to expand on for residents, though as the weeks moved forward there was no mention of that change until Monday's Budget presentation.

Even with Monday's council session, none of the Council membership spoke to the topic on the night.

Though the initiative may become one of a number of items that the public takes up with Council as their budget consultation process moves forward.

Residents however would probably have been better served if the councillors had shared some thoughts and provided for an explanation in a public session previous to the surprise entry in the Budget planning.

In follow up notes related to the Budget Process, the City's Financial Office outlined more background on the plans for the relief firefighter hires. 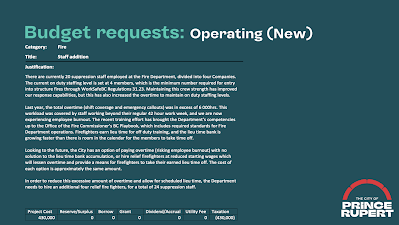 More notes on Monday's Council Session can be reviewed from our Council Timeline feature here.

A wider overview of the work of Emergency Responders across the Northwest is available here.