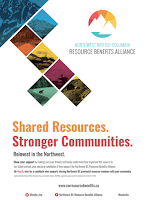 With the 2017 provincial election campaign heading into the final weekend, the regional  organization looking to gain better financial returns to the Northwest for resource and industrial based projects is claiming a bit of success with their information campaign.

The Northwest British Columbia Resource Benefits Association has been holding a fairly energetic information campaign over the last month, tied in with the current provincial election campaign and designed to raise awareness of the issues that communities are facing when it comes to adjusting to industrial development and the quest for a larger share of tax revenue to address local needs.

Prince Rupert Mayor Lee Brain has been one of the stronger advocates for the work of the Alliance on the North Coast, becoming quite engaged in their advertising campaign in recent weeks and raising the issue at the most recent session of Prince Rupert Council.


At last week's Council Meeting, Mr. Brain outlined the approach that the Resource Benefits Alliance has been taking and took note that they were specifically seeking answers from the candidates across the region in the election campaign that comes to an end on Tuesday.

"Last year, 21 local governments and Regional Districts signed an MOU to enter into negotiations with the province on a regional benefits agreement,  from a share of the tax revenue being generated from regional resource development happening all around the North, whether it's forestry, or mining or port developments to be returned essentially to the communities in a Fair share arrangement similar to that of Northeast BC, as well as the Columbia basin.

Hundreds of millions of dollars are being generated in the north and being passed down to Victoria and the current system in place is that we are as a community supporting those industries, however sometimes those industries are operating outside of municipal and regional district boundaries, but are still impacting the area and not required to pay into tax resources and things like that. However the province is still getting their share and what ends up happening is that us as communities up here in the North have to compete with each other for, grants, for infrastructure grants,  for attention from the province for a share of the money that we are generating on their behalf.

You can review the complete collection of talking points on the issue from the video archive of last Monday's Council session which starts at the twenty six minute point.


As the election campaign now heads into the home stretch, the Northwest Resource Benefits Alliance can finally point to their call having some resonance with the politicians, as NDP leader John Horgan offered up his support on Wednesday for a larger share of the financial returns from resource and industrial development.

“The BC NDP has always supported the principle of ensuring that resource-dependent communities benefit from economic development in their region.

That’s why I am proud to say a BC NDP government will undertake negotiations with northwest communities to ensure that benefits from future economic development stays in those communities.
As requested by the alliance, we will initiate those negotiations by September of 2017.”
-- NDP Leader John Horgan, May 3, 2017

The Northwest BC Resource Benefits Alliance has been keeping up their push with local candidates a across the Northwest through the week, you can follow some of their latest notes from their Facebook page updates here.

You can learn more about their initiative from their website page.