An overnight armed robbery on the city's east side sent responding units of the Prince Rupert RCMP to the Hays Cove Petro-Can on Thursday morning, with members attending to a call that came in shortly after 2 AM.

Upon arrival the Mounties found the clerk at the station unhurt, but shaken up after going to face to face with the suspect who had brandished a black coloured pistol during the robbery.

Thankfully the clerk was not injured or assaulted during the course of the incident, with the suspect escaping the scene heading west towards Fifth Avenue East with an undisclosed amount of cash.

The RCMP quickly set up a containment perimeter to try and locate the suspect, making use of both the service dog and a forensics specialist who was called out to the scene. However despite the intensive search, the suspect eluded the police patrols and remains at large.

The suspect is described as male with a slim build with height estimated at 6 feet, to 6 foot two. During the commission of the robbery he was wearing a bandana with as skull print on it, along with a block hoodie with "Obey" in white on the front.  He also was wearing black pants with elastic around the ankles, along with grey and white skateboard shoes. 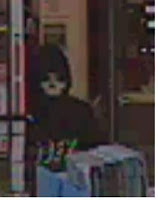 The case file remains active and the Prince Rupert RCMP is seeking the assistance of the public in their investigation.

Should you have been in that area during the early morning hours of Thursday and noticed the suspect, or seen anything of a suspicious nature, you are asked to contact the Prince Rupert detachment at 250-627-0700 or through Crimestoppers at 1-800-222-TIPS.

The east side robbery is the latest one which has targeted local convenience stores, in late July the PJ's location on Park Avenue was the location of a robbery.

You can follow updates on case files from Northwest Emergency Responders from our archive page here.

Note: The RCMP updated their information on the incident with this item posted to the Prince Rupert Detachment website on September 6
Posted by . at 7:20 PM

Email ThisBlogThis!Share to TwitterShare to FacebookShare to Pinterest
Labels: Armed Robber on City's east side Thursday AM