Thursday night was debate night in British Columbia, but for the most part it wasn't so much a debate as a thirty minute argument, that as Premier John Horgan and Liberal leader Andrew Wilkinson recited their talking points on Electoral reform, but for the most part probably did little to move the needle for those that stuck with the event for the full half hour.

The format offered up some hope, some introductory remarks, the two proponents of the Yes and the No side able to address their concerns to each other for what was supposed to be a short back and forth on the referendum issues.

But for the most part the half hour was just an extended version of the daily Question Period at the Legislature, a rambunctious place where scoring political points is seemingly the goal over the delivery of extensive overview of the topics.

And that for the most part was how Thursday's debate was viewed, there was little in the way of expansion on the referendum debate from either participant.

The Premier calling for British Columbians to give the proportional system plans a chance, the Liberal leader observing that voters really still don't know much about what the Premier has crafted for electoral reform.

Much of the thirty minutes was spent talking over each other, a challenge that moderators Linda Steele and Stephen Quinn tried to address, though with limited success a times.

There were however a few moments that caught the attention of viewers and helped to define some of the message making on the night.

Among them, Premier Horgan's attempts to appeal the youth of today in their own vernacular of woke and lit; the Opposition Leaders attempts to paint the Premier as used car salesman who may not be sharing all the details of the history of the car you want to buy.

The night's scorecard in the post debate reviews looked as follows:

Among those that were viewing the night's political theatre were the two Northwest MLA's with North Coast MLA Jennifer Rice and Skeena MLA Ellis Ross providing for their reviews at the end of the referendum debate.

And while the two it would seem will not be taking their commentary on tour for the residents of the Northwest through their own debate, we do have this one exchange through twitter to serve as what could have been our own Referendum rumble. 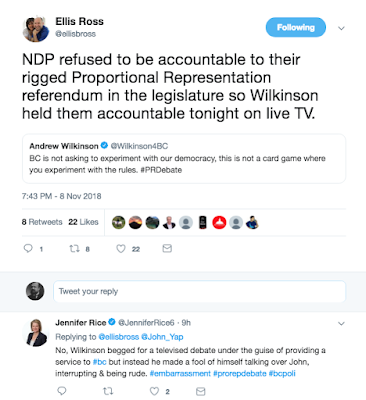 The two MLA's had more to say through their social media streams, for a review as to how each viewed Thursday's leaders showdown see the links below:

With the debate now behind us, the push towards the mail in deadline of November 30th will continue as both sides seek to get their supporters engaged enough to mail in their ballots, something that so far is not what could be called a resounding success.

As Premier Horgan and Opposition Leader Wilkinson took to their sparring on Thursday, it was noted that the return rate for ballots was at the moment still a meagre 2 per cent ... perhaps an indication that this latest round of electoral reform is not resonating all that well with the public.

Post debate indications seem to be that Thursday's verbal jousting may not have done all that much to spur British Columbians to fill out and mail their ballots by the time deadline arrives.

That poor response so far to the prospect of changing the electoral system is something that the governing NDP will have to consider should those numbers not move much by the end of the month, at some point they will have to decide whether changing the political system based on a stunningly low turnout is a political risk that they are willing to take.

For those who missed Thursday's recitation of the talking points of electoral reform, Global hosts a replay of the Debate on their website here.

You can review more of the views from all sides of the electoral reform debate from our political blog D'Arcy McGee where we host an archive of notes that chart the path of this years reform process.

To return to the most recent blog posting of the day, click here.
Posted by . at 9:01 AM