Upcoming Adverse weather results in schedule change for BC Ferries

With Environment Canada issuing a Wind Warning for the North Coast and Haida Gwaii, BC Ferries has adjusted its schedule for Monday's journey from Haida Gwaii to Prince Rupert.

The Northern Expedition is expected to depart from Fairview Bay Terminal at 10 PM this evening, however the return journey for Monday is now set to take place twelve hours later with a 10 PM departure out of Skidegate.

Tuesday's Schedule calls for a 10 AM departure out of Prince Rupert, the return leg again set for 10 PM Tuesday evening.

All times are dependent on the status of the weather at time of departure. 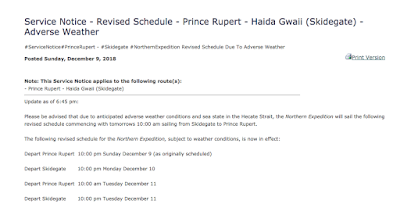 You can get updates from the BC Ferries Website here. The Marine Weather forecast now has a STORM WARNING in effect, with winds of up to 45 to 55 knots by the noon  hour of Monday,  Seas will be building to 7 metres by Monday afternoon as well.

For a look at more notes related to BC Ferries see our archive page here.

Email ThisBlogThis!Share to TwitterShare to FacebookShare to Pinterest
Labels: Schedule change for Northern Expedition as storm comes towards coast