Conservative candidate Claire Rattée will be brining the Conservative campaign message to the North Coast this weekend, with some door knocking planned for the Prince Rupert area during the Labour Day weekend period.

Ms. Rattée outlined her plans through her Facebook page noting that she is looking for some help from Conservatives in Prince Rupert as she heads out on the door to door tour. 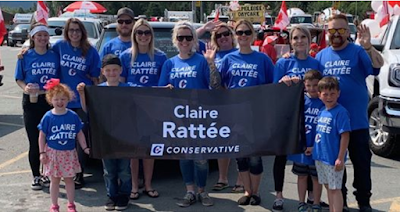 While Prince Rupert has been a pretty secure NDP stronghold in recent years, the Conservative candidate has been buoyed by some recent polling that indicates that she is having some success in getting her campaign themes out to the public.

As we noted earlier this week, the most recent notes from 338Canada show that while the NDP still have a good hold on the prospects for October 21st, the Conservatives currently hold just under 30 percent of the projected vote, eleven percent short of the NDP support.

Trying to narrow that gap coming out of Labour Day will be one element of her get to know the voter work this weekend, taking advantage of the stopover in the city to hear from residents in Prince Rupert about the issues that they are most concerned about as the nation prepares to head into the heavy campaigning period of the fall.

The other five candidates in the Skeena-Bulkley race have not indicated as of yet what their weekend campaign plans may be.

You can find more items of interest on the campaign in Skeena-Bulkley Valley through our archive page here.

Email ThisBlogThis!Share to TwitterShare to FacebookShare to Pinterest
Labels: Conservatives to door knock in Prince Rupert this weekend