Labour Day with the MLA!

Monday not only marks the unofficial end of our summer, but the day when workers across Canada take time out to thank those who travelled roads well before them, providing for better working conditions, better pay and recognition for ordinary Canadians at work each day.

Labour Day in Prince Rupert this year will feature a celebration of the North Coast worker at Mariner's Park; as MLA Jennifer Rice serves up some hot dogs for those stopping by Monday from 11:30 AM to 2 PM. 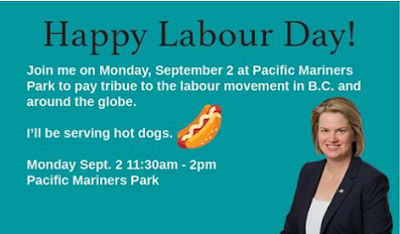 Prince Rupert has a long history with the union movement with the unpredictability of the times playing out through the decades in the pulp and fishing sectors, and now with new industrial foundations being built along the Prince Rupert waterfront and the range of terminals that make for the Port of Prince Rupert.

As well, with more and more employment being created in the public sector, teachers, civic workers and support workers in many locations across the city will be taking the Monday to think towards the days of the past and what may come in the future.

Likewise, those working in the  the Transportation services, commercial sector and other ventures have also in many instances, become part of a union, seeking to protect their jobs and rights on the work site.

In anticipation of Monday, the BC Federation of Labour has released their annual Labour Day message, highlight some of the achievements of the last year and challenges still ahead.

Last year the BC Fed provided a glimpse of how the workers of today are connected to those of the past.


Unifor which represents a number of workers in Prince Rupert, primarily through its affiliation with UFAWU, provided a look at the modern era for unions today.

For those taking time off on Monday, a wish for a safe and enjoyable Labour Day.

For a look back at some of the Labour notes of the Northwest this year see our archive page here.