Crime Stats make for conversations in communities around the Northwest ... with one exception


Through much of the last month, communities along the Highway 16 corridor have been reviewing the release of crime data from Statistics Canada in July, with the figures and findings providing a snapshot of the day to day files that are handled by each communities RCMP detachments.

In some instances, the themes of the Stats release and general observations have generated comments from municipal politicians and been discussed in Council chambers from Terrace through to Burns Lake over the last month.

That as local officials share their thoughts and ask questions on behalf of their residents.

We made note of the Prince Rupert numbers in late July, taking a look at the range of data that had been released by Stats Canada at the time. 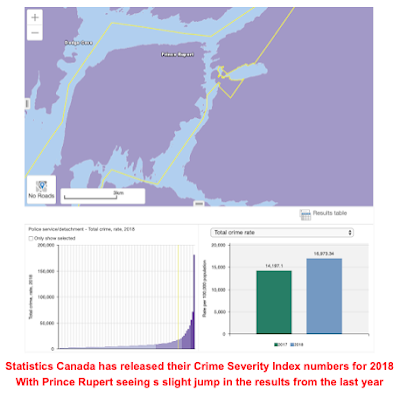 So far however, the data doesn't seem to have captured the attention of Prince Rupert's elected officials, with no mention of them in public session and little indication if the City Council has any plans to have the Detachment head come to Council during a public session to go over the findings and help interpret them for the public.

While Terrace, Kitimat and Smithers Councils frequently have those in charge of their detachments deliver reports and discuss policing issues during a public session, Prince Rupert Council rarely has provided for a public opportunity at their council sessions for such updates.

Not that there hasn't been some past interest expressed by some councillors in having the RCMP attend a Council session to provide some background or possibly answer some questions.

It has been a frequent theme for Councillor Barry Cunningham over his time in office, and in May Councillor Nick Adey has also proposed an invitation for the local detachment to be invited to council to share some notes on the state of policing in the community.

While Council did  take in a presentation of the Safe Place program in February of last year, the last time that Council hosted detachment Commander Blake Ward in a public setting was in August of 2017.

So an invitation would seem to be long overdue, with perhaps an opportunity to pencil in more frequent updates moving forward.


With just six council sessions left on the 2019 Council calendar, if they are to have some success in providing for that kind of public forum, they may have to be a bit more determined in their conversations with their fellow council members to make it happen.

For now, about the only notes we hear of policing in the community comes from the work of the detachment on the streets, some of which you can catch up on from our Emergency Responders Archive here.

You can review our archive of Council sessions here.