With a three day break from our late August deluge, crews from Adventure Paving were fast at work this morning, putting down the first layers of pavement to put the wrap up on the McBride Street waterline infrastructure project.

On August 19th, the City of Prince Rupert outlined how the majority of the work on the two month project had been completed by City work crews on the 16th and how the only remaining piece of the project was the paving of the area.

However, Mother Nature had some other ideas, sending system after system ashore for the following week, laying to waste any ambitious paving plans for the stretch of McBride.

With and eye on the skies and three days of Sun in the forecast ahead this week, the crews were quick to work today and the project should be able to beat the next round of inclement weather expected by this weekend. 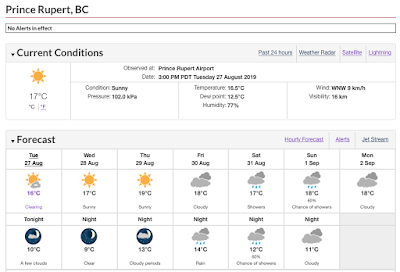 The McBride Street project got underway in Mid June and came with timeline of four to six months, a hopeful target that faded somewhat as July came to an end.

Last week, the pace of some of the major summer projects made for a discussion topic at Prince Rupert City Council, with both the McBride project and another major bit of infrastructure work on Seventh Avenue east making for some inquiries from Councillor Barry Cunningham.

For more items of note related to the city's infrastructure program for the year see our archive page here.