An attempt yesterday to have Ethics Commissioner Mario Dion provide further background to his ruling of last week on Justin Trudeau's handling of the SNC-Lavalin file came to a pretty fast end,  as the request from Opposition members was shut down by the majority of the government members on the committee panel Wednesday.

The opposition were hoping to hear from the Commissioner as part of the delivery of what is known as the Trudeau II report, which was released last week and held the Prime Minister guilty of ethics violations in his handling of the SNC-Lavalin situation.

However, the collective of  government MP's in effect seemed to take on the narrative that "there's nothing to see here, move along, move along" voting during the course of the emergency session of the committee to refuse to issue the invitation to the Commissioner.


The full ethics committee session of Wednesday afternoon can be viewed above.

Following the end of the session, a number of opposition and government members were quick to the television cameras outside of the conference hall; as well as to take to their Social Media feeds.

Some to defend the Liberal move, others  to express their outrage to the Government's successful attempt to shut down yet another element of their work on the SNC-Lavalin issues. 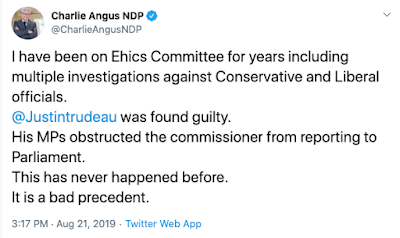 Indeed as Mr. Angus notes, it is quite rare to deny the author of a report for any Parliamentary committee an opportunity to speak to their work, adding to the cloud of controversy that has been generated by the entire SNC-Lavalin Affair.

Much of that theme as well as some background towards the controversy can be found from our Ottawa Observations Archive from our political blog D'Arcy McGee.

To view the most recent blog posting of the day, click here.
Posted by . at 1:05 PM

Email ThisBlogThis!Share to TwitterShare to FacebookShare to Pinterest
Labels: Liberals shut down opportunity to hear from Ethics Commissioner