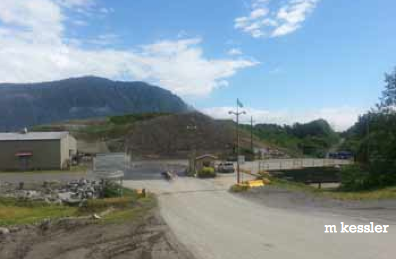 The prospect of dwindling space at the Prince Rupert landfill site on the Ridley Island Access road made for a theme for part of the Council members question period on Monday evening, as Councillor Barry Cunningham sought out some updated information on the plan to add an additional cell to the landfill footprint.

"What's happening with our cell for the garbage dump, we've known for two or three years   that we need a new cell and now we're forcing people to take bigger loads to Terrace, so what's the delay why are we not progressing on this ..."-- Councillor Barry Cunningham on the need for expansion of cells at the Ridley Island Access Road landfill site

Fielding the Question was  the City's Chief Financial Officer, Corinne Bomben who noted that the landfill expansion was part of the five year plan recently adopted by Council and how the City would require a loan to take on the project.

She observed that first step in the process would be to provide for a detailed design study first to determine the cost of the project and how that will inform Council as to how much of a loan would be required. With Council then to go to the public to access the required funding.

The CFO observed that it was anticipated that much of that work would be ready for the process to start next year.

You can review the discussion on the progress of the proposed expansion from the City's Video Archive starting at the 55 minute mark.

Councillor Cunningham previously raised the issue of the need to move on the expansion issue in June, when he noted that the with the current site near capacity, some of the contractors engaged in  large scale demolition work in the community are having to cart their items to Terrace for disposal, something which he noted was costing the City of Prince Rupert some valuable revenue.

To view the most recent blog posting of the day, click here.
Posted by . at 9:01 AM