Have Prince Rupert's fish workers been kicked to the curb by area politicians?

It's been said that the Fishery is a dying industry, and if the results of the last few years and the impact on the local economy are any indication, then indeed someone, somewhere may very well be engraving that tombstone as you read this piece.

However, for the moment, there are still hundreds of North Coast workers and their families who once made a living from that industry and at this moment in time, in a very troubled fishing season they are facing some very tough times.

And as we put an end to August, it doesn't seem that their plight is making much of an impact on many of those that they may have elected to office.

Yesterday we made note of a letter from Shane Simpson the Provincial Minister of Social Development and Poverty Reduction, responding to a call from UFAWU-Unifor to have the Federal Government provide for some assistance for those that are in dire straits this fishing season.

The Minister's letter was included as part of a Facebook post from the union page, which also seems to indicate the level of their frustration in getting the message across that help is needed as soon as possible.. 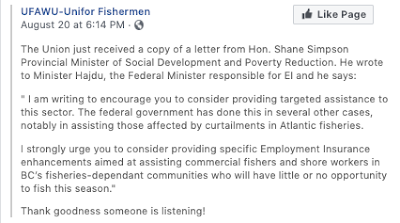 That last line again:  Thank goodness someone is listening

That does indicate that there is some work to be done from elected officials a little closer to the Fraser Street Union Hall, where as we noted earlier this month, the current campaign to draw attention to what is described as a disastrous fishing season was first issued.

Since that time however, that call to action has not seemingly found much resonance from the MLA's office, the MP's office, or that of Prince Rupert City Council.

Three levels of local representation which seem to have let the summer fishing woes slide off their radars through much of month.

A review of their social media fields, which of late seem to be the main vehicle for political statements on the North Coast, have not offered up much in the way of common cause for the union call for some help from Ottawa.

Ms. Rice did make mention of the Provincial Government's letter today on her Facebook page, but scroll down on her portal and you'll find that the only other comment of the local fishery came on August 3rd, which was a shout out for an ecotrust Canada initiative.

A program which while a valuable addition to the dialogue is not part of the current call for urgent assistance from the union.

The immediate issues facing North Coast residents seems to have slipped off the radar of MP Nathan Cullen as well, his social media feed  more of a farewell travelogue this month as opposed to raising the visibility of the fishing community.

For Mayor Lee Brain and the members of Prince Rupert City Council, the plight of the local workers has not made for one comment of concern, or any calls for a show of support through the relaxed summer months of Council sessions.

When it comes to fishery themes, for the most part, with the exit of former Councillor Joy Thorkelson prior to the last election, the once frequent topic of fishery concerns for Council sessions has seemingly headed off towards its own particular sunset around the Council chamber.

At the most recent Council session of Monday evening, Mayor Brain offered up a view of a Prince Rupert looking forward to what will apparently be bountiful days of economic growth through Port development.

That buoyant view of the Port dominated future comes while an industry that once built the city's economic foundation struggles; leaving as its largest casualties those employees (and their families) who once earned an income working the boats of the fleet and in the city's fish plants.

That's not to say that all three levels of government on the North Coast haven't spoken out in the past, or called for some form of Federal action on fishery issues.

The call for adjacency in the fishery has made for a theme from all of them in the past, a common cause that is more of a long term issue, one still awaiting resolution from the Federal government and a Fisheries Minister who has still to visit this community.

That long sought after quest for equal treatment with the Atlantic provinces was part of a Wild Salmon Report delivered in March, some of those elements also made for the recommendations from a Commons Committee review published in May.

But that is all policy work and something still off in the distance, the more immediate concern today, is the disaster that is the 2019 fishing season.

A three month period highlighted by low stocks, few fishery openings and even fewer calls to work; a trilogy of events that has made an already bad situation for local workers even worse.

Earlier this month,  the Mayors of the Highway 16 corridor, along with regional MLA's banded together to demand Federal action for those forestry communities that are facing their own challenging times.

A call echoed by the MP for Skeena-Bulkley Valley.

Those who are facing the impact of a fishing season and fishing industry in as much, if not more trouble than that of the forestry, can only wonder why their own political leaders aren't taking charge of a similar initiative closer to home.

For a look back at this fishing season and other notes related to the industry see our archive page here.


To view the most recent blog posting of the day, click here.
Posted by . at 3:36 PM

Email ThisBlogThis!Share to TwitterShare to FacebookShare to Pinterest
Labels: Fishery workers wait for some help and a bit of support