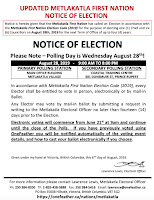 After just over two months of hearing from a range of candidates on a number of local issues, voters in Metlakatla will be making their decisions next week; as the campaigning for positions on the First Nation's Council heads into its final weekend, with the voting booths set to open on Wednesday, August 28th.

Twelve candidates put their name into nomination, with two contesting the Chief Councillors position, four standing for office as On Reserve Councillor and six seeking office as In Territory Councillors.

We outlined the names of those seeking office back in June when the nomination period closed and the candidates began to share their thoughts and ambitions for the community as part of the summer long campaign period.

Among the races, Long serving Metlakatla leader Harold Leighton is looking to retain his position and secure another term as Chief Councillor, he is facing a challenge from Randall Cobb.


A look at the membership of the current governing Council can be explored here.

Metlakatla First Nation  members can also vote by electronic voting, a process which began in late June and continues until the close of the polls on Wednesday.

Voters also had opportunity to vote by mail in ballot, with the deadline for that option also prior to the end of the polling period.

More background on the voting options can be found here.

Updates from the community as they head towards election day can be reviewed from the Metlakatla website and Facebook page.

More notes related to the Metlakatla First Nation can be explored on our archive page.


To view the most recent blog posting of the day, click here.
Posted by . at 9:14 AM