Travellers making their way back to the North Coast from Haida Gwaii, will have an additional twelve hours in port at Skidegate today, as BC Ferries suspends its service on the Hecate Strait Crossing this morning.

The Service Advisory was issued for the Northern Adventure at 730, with today's 10 AM scheduled sailing delayed by twelve hours.

In their notice, BC Ferries advises that they will hold in port at Skidegate through the day, looking to make the departure at 10 PM this evening. 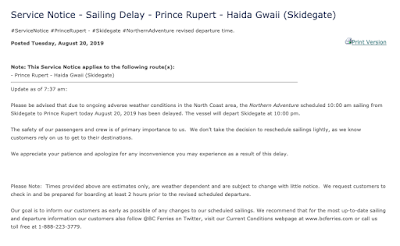 As we noted earlier this morning, Haida Gwaii is currently in the midst of a Storm Warning for its marine areas, with strong winds and heavy seas anticipated for much of the day.

The crossing between Haida Gwaii and the North Coast is expected to see Winds of 50 knots and seas of 7 metres through the day. 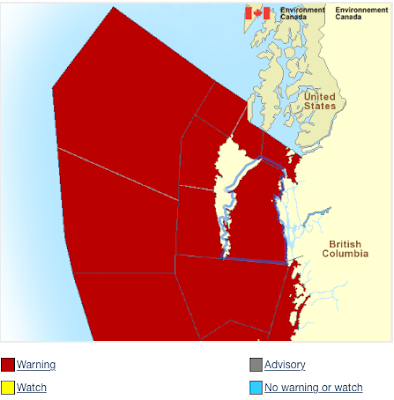 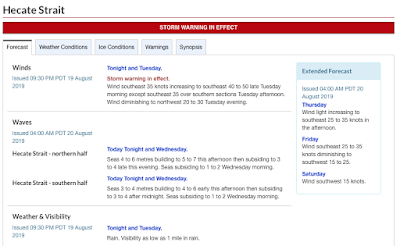 You can access the latest updates on the Northern Adventure's status from the BC Ferries Service Notices page.

For more items of note related to Marine transportation on the North Coast see our archive page here.


To view the most recent blog posting of the day, click here.
Posted by . at 8:17 AM