The NDP candidate in this falls Federal election campaign is putting his full time job on hold for the next two months, with Smithers Mayor Taylor Bachrach announcing that he is taking a leave of absence from the Mayor's position for the Bulkley Valley community.

He put forward the motion for Council as part of the Tuesday session of Smithers Council, a move which was approved by the Council membership, he will step back from the Mayoralty as of the end of August.

You can hear his thoughts for the Council at the fifty eight minute mark of their session, he also commented further on the topic towards the end of the session.

Mr. Bachrach also followed up with the news through his social media stream, noting his decision to step aside during the campaign and making note of a number of local achievements while on Council. 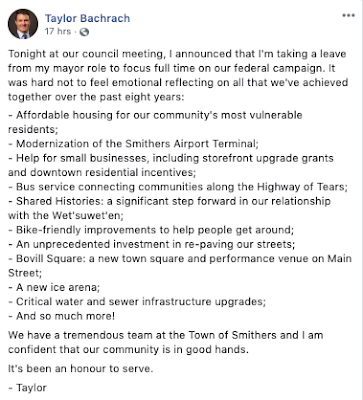 For more items of note from the Skeena Bulkley-Valley campaign see our archive page here.

Email ThisBlogThis!Share to TwitterShare to FacebookShare to Pinterest
Labels: Taylor Bachrach to take leave of absence as Mayor during Federal election campaign