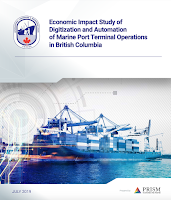 Just in time for the Labour Day weekend, the union which represents longshore workers up and down the British Columbia coast has released a report it has commissioned on the topic of automation.

The word is akin to some of the saltiest of language one might hear on the docks and in the case of the report put together by PRISM Economics and Analysis  it offers a future of lost jobs for workers, with a significant impact expected in Prince Rupert.

With the union warning that if a full scale automation program was to move forward more than 9,200 middle class jobs would be removed from the provincial employment listings, and with it a half billion dollars per year taken out of the provincial economy.

Calling the situation a red flag for Federal political leaders, Rob Ashton the President of the ILWU offered up some stark figures on the nature of the labour disruption that automation could bring the province's waterfront terminals.

In Prince Rupert, one quarter of middle-income and fully two-thirds of high-income employment is at risk of elimination due to future automation.


“The companies that automate these jobs out of existence stand to benefit. It is equally clear that workers, communities and governments would be left to pick up the pieces after the damage is done,” -- Rob Ashton ILWU

The current salary deliveries in Prince Rupert offer up a glimpse as to what kind of a hit that type of job loss, if it were to be realized, would deliver to the local employment scene and economy. 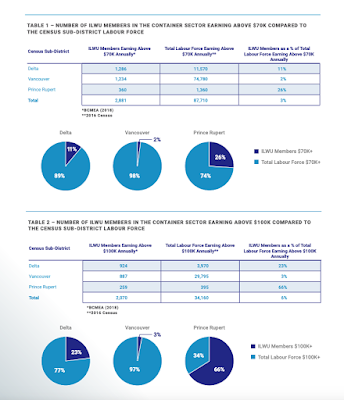 The documentation that makes up the data for the report suggests that the impact would be more dire on new terminal developments (Greenfield), as opposed to existing terminal (Brownfield) locations.

The estimated job loss across the census sub-districts of Delta, Vancouver and Prince Rupert account for 2% of the total labour force of 431,975.

Further, core job loss in Delta, Vancouver and Prince Rupert account for 4% of total jobs paying above $70,000 per year.

In Prince Rupert the results are particularly felt as the district would have a much larger proportional impact relative to the overall population. -- From the ILWU report on automation commissioned

The report also explores the implication on workers pension and group benefit plans and notes that any loss of jobs could see a reduction in consumer spending as well as bring about an out migration from communities.

The concluding themes to the report observe that these types of outcomes are not inevitable and calls on the Federal government to be aware of the potential job loss and the need to address the current issues facing workers and those to come.

In spite of widespread disruption to many industries in our country, there has not been a single major change in workforce adjustment programs in Canada for 30 years, apart from cuts to the Employment Insurance program.

The next federal government needs to quickly establish retraining, job search and other programs to mitigate the economic harm that is done to workers and communities hit by employment loss of this scale.

Further observations from ILWU President can be found from this statement which was issued with the release of the report.

The prospect of automation would seem to run counter to the optimism that City Council has seemed to put on the Port's footprint in the community and the prospect of thousands of new jobs to be created and how that will impact on the North Coast.

That was a theme that made for some of the narrative of the recent four day Redesign Rupert session at the Crest Hotel, as well as for some commentary at Prince Rupert City Council earlier this month.

When it comes to lost tax revenues, the municipal sector fares better than the provincial and federal revenue streams, but with lost jobs will come lost income and that will deliver lost tax revenue for all three. 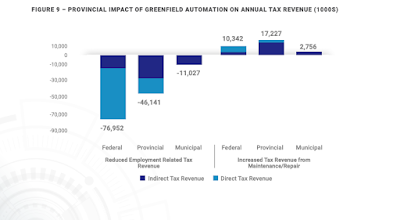 The NCR has made inquiries of the Port of Prince Rupert and DP World, should we hear back we will provide a look at how they view the findings of the ILWU report.

A summary of the key elements of the report can be examined here.