Federal Election season is proving to be a positive thing for Prince Rupert, with an announcement today from three levels of government for funding for a New water Treatment plant and submarine water pipeline for the Prince Rupert Area.

The funding which was released as part of a number of funding projects in BC will see the Federal government provide for $12,058,520 towards the project with the Province picking up $10,047,761 for the project.

The City of Prince Rupert will be required to contribute $8,094,597 towards the Thirty Million dollar project.

The New Water treatment plant and submarine water pipeline across Fern Channel will help to ensure for clean, safe drinking water for residents and visitors alike and should help to resolve any future Boil Water notices for the community.

The plan for the water treatment facility and submarine water pipeline has been a top item on Mayor Lee Brain's wish list and has often been the focus of his Hays 2.0 presentations.

The issue of safe drinking water became a major note of concern over the Christmas period, when residents of Prince Rupert were put under a Boil Water Advisory, a situation which as was discovered in March turned out to be a false alarm.

Today's announcement through the Federal government was one of thirteen federal spending announcements revealed for British Columbia totalling over 100 million dollars in funding.

It comes through the Federal Government's Green Infrastructure Stream of the Investing in Canada Plan.

Earlier this year during the peak period for the Boil Water situation,  the City outlined some of the challenges ahead for the development of the water treatment plant and submarine line, that through a January update.

Of note since then, is that the price of the city's share has increased by 1 million dollars. 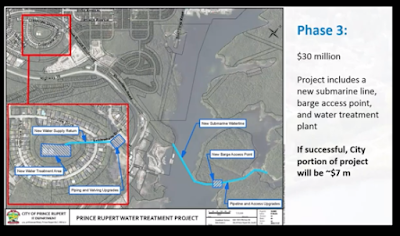 The City's information release related to today's funding success highlighted the priority that the City has placed on its water infrastructure issues.

“In just 5 years we’ve obtained the grants necessary to conduct all three phases of our water project, ensuring a full overhaul of our water supply infrastructure to provide safe and reliable drinking water to our residents. This project has been the number one priority of Council since we took office, and we are incredibly grateful for our partners at the Provincial and Federal governments for seeing this as a priority with us.” -- Mayor Lee Brain

The City's notes on today's funding announcement did not indicate what steps the City would be taking to deliver on their required 8 million plus contribution to the project, or what kind of timeline that residents may be looking at towards completion of the work.

You can review more on the city's Infrastructure issues from our archive page here.


Correction: We have clarified the nature of the terminology from one sentence from our original post, to note the project is a water treatment facility.

To view the most recent blog posting of the day, click here.
Posted by . at 10:59 AM