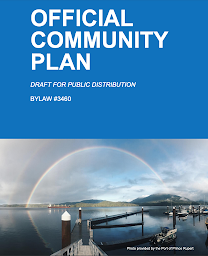 The first run of what will soon be the new guidelines for development in Prince Rupert was revealed on Tuesday, with the City of Prince Rupert releasing the First Draft of the new Official Community Plan, the first significant remaking of the document since 2007.

The work which was framed by the Prince Rupert 2030 vision, Hays 2.0 Plan, RedesignRupert and other programs provides a blue print of sorts to how the City Council views the future of the city and the elements that will go into creating it.

The Official Community Plan draft was created by Rob Buchan, the contract planner that the City has hired for the work who has spent the last eight months or so reviewing all of the previous work and collecting his own data to develop the 328 page guidebook.

Outside of the residential and industrial areas, the new Prince Rupert will effectively come in three zones, a Downtown, a Mid town and a Marina District. 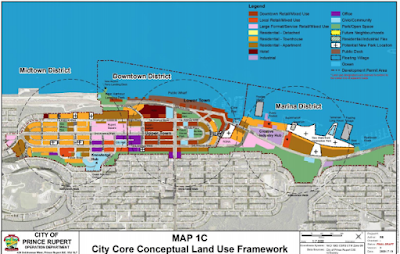 Much of the focus of the OCP is built on the shape of those three areas, with the dividing line between the Midtown to the West and the Downtown (and CowBay area) to the East set at City Hall. The Marina area starts at the Cow Bay marina and travels eastwards along George Hills Way. 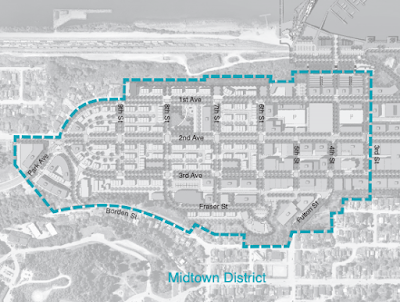 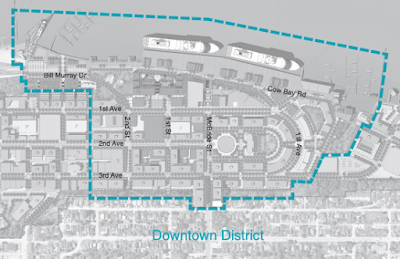 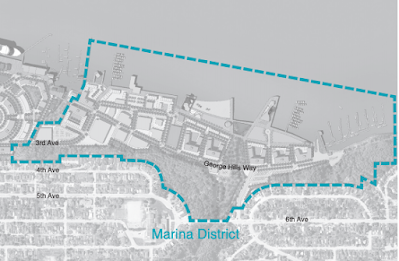 Among some of the themes of note a focus on height restrictions for some areas to keep harbour view, while allowing taller structures in areas where there won't be as much of an impact.
The document makes mention of a heritage core, which mostly focuses on Third Avenue West, as well as a one block stretch of Second Avenue West, the OCP providing for some of the preferences from the City when it comes to redevelopment in the area, and some of the things that it won't be inclined to favour.
Nodes make for subsections of the three districts, with the Cow Bay node, a Waterfront Node and a Civic Node centred around the Court House among areas to explore in the document. 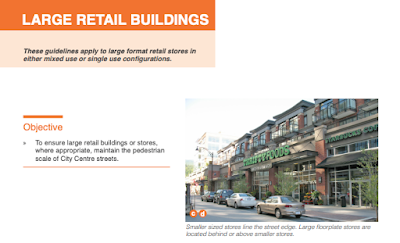 The often mentioned quest for Large retail outlets known as Big Box Stores also gets explored in the OCP, with a range of guidelines, though as it has in the past, the discussion seems focused on ensuring that any such retailers build their footprint in the commercial sector of the downtown area.

The future of housing is a key element for the plan with guidelines for the number of units by type, potential locations and proposed incentives to create housing for the community, the direction for future residential growth includes an emphasis on neighbourhood livability and proximity to amenities for the residents in those areas. 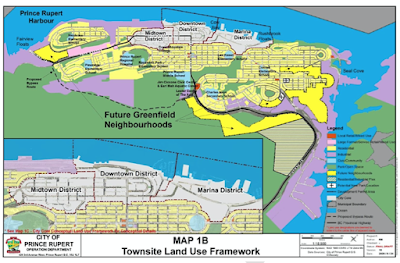 The Introduction to the project highlights the anticipated growth for the Port and the impact it will have on the community.
This OCP is the first major review of city-wide land use policies since the last OCP which was adopted in 2007. Much has happened since the 2007 plan was adopted. Most notable is the recent positive attention and action in developing our port facilities. The unveiling of the Prince Rupert 2030 The Vision strategy (The 2030 Vision) concluded a significant and collaborative effort to develop a vision for how Prince Rupert would respond to, manage and benefit from the impending growth expected for our ports.
This expected port growth is expected to see a two-fold increase in capacity and with associated growth from supporting services could result in a doubling of our population over the next ten years. This OCP will guide Prince Rupert’s growth.
Among the many themes to review from the Draft OCP.
Background to the creation of the plan
Planning Principles to be used
Land Use Policies
Climate Change and CHG policy
Food Systems
Social and Cultural Development
Development Permit Areas
The project includes the Vision Statement to a fashion, one that the City Council has created for their document, which they frame as Prince Rupert, a World Class Port City. 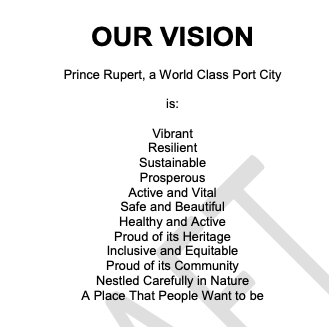 The launch yesterday begins the public feedback process, though where in previous years the City Council might have hosted a large scale presentation of the OCP and then taken comments in a public setting, with COVID-19 protocols still in place, it will be a different approach towards commentary.

For the most part for those with an interest in the topic, the public feedback element will be limited to a meeting by appointment, with the Mayor and Mr. Buchan, something that can be booked by calling the Mayor's Executive Assistant Brianne Bunko at 250-627-0934 or emailing her at brianne.bunko@princerupert.ca

Those opportunities for a meeting with the mayor and the planner will be for one week only, from September 14-18.

There is also mention of the potential for other community engagement on the OCP, however the details have yet to be made public as to how that process may look.

To introduce your assignment of review, the City of Prince Rupert created a YouTube video to explain the OCP Process and document release.

The tutorial provides a look at some of the work that went into the OCP process and the areas where the City wants residents to learn more about the path ahead.

The City is also reminding residents of the current round of survey taking underway through the Rupert Talks portal, the results of which will be included as part of the final review for the Plan

Once Council has received the feedback to the Draft Official Community Plan, it will be brought back for final consideration to guide the development process for the decades ahead.

Mr. Buchan introduced a snapshot of his work on the Draft OCP at the August 27th Council session, you can review his presentation to Council here.

More background on the process towards a new Official Community Plan can be explored through our archive page.
A wider overview of past Council Discussions on all themes can be found here.
Posted by . at 9:23 AM