After close to two and half years, Prince Rupert harbour watchers will soon be able to keep an eye out for the familiar funnel of the MV Matanuska, with the Alaska Marine Highway System announcing that it will resume its service to Prince Rupert this summer.

Travellers to and from the Alaskan panhandle and beyond will be able to start booking their reservations in May for sailings in June.

The reunion for the two communities of Prince Rupert and Ketchikan was announced in a Press Release today from the Commissioner of the Department of Transportation and  Public Facilities.

"I'm pleased to announce that through our department's efforts over the past two years, we can restore the Prince Rupert-Alaska connection. Prince Rupert is a valuable mainland link for Alaska, and we intend to keep it open for travelers in the years to come." -- Alaska Department of Transportation and Public Facilities (DOT&PF) Commissioner Ryan Anderson

In their announcement today, the AMHS outlined how it had pursued all avenues for local law enforcement but could not secure the staff necessary to fulfill the requirement. While the COVID-19 pandemic stalled efforts to restore the Prince Rupert connection, AMHS continued discussions with the U.S. CBP and the Canada Border Services Agency.

No details related to the solution to the original issue were included in today's confirmation for the return to sailings.

The full statement can be reviewed below:

The return of service will reconnect the two communities and be a significant boost to local retailers and hospitality providers, adding for a consistent flow of travellers aboard the Matanuska twice monthly from June to September.

The first sailing from Prince Rupert to Ketchikan is set for June 21st  at 2:15 AM 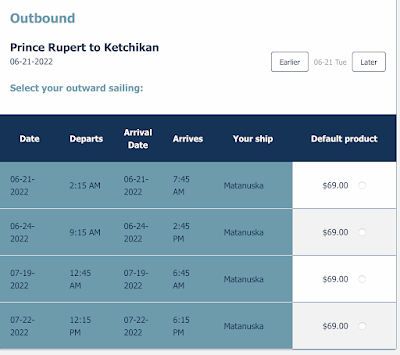 What the fall schedule will look like won't be known until later this summer.

More notes on the Alaska Marine Highway System can be explored from our archive page.