A Diverted flight, travel advisories and a bit of snow to shovel after a short blast of winter 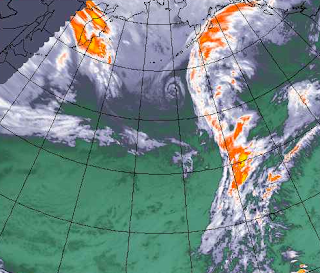 Prince Rupert's first battle of the year with winter found a significant snowfall to shovel out and travel plans quickly changing on Wednesday.

The snow which began on Tuesday evening, continued to pile up overnight and into the late morning on the North Coast.  Bringing a total accumulation of around 20 centimetres  before it had moved inland, making for challenging road conditions for those making the Wednesday morning drive to work or school, or generally travelling around the city.

As the storm continued to blow onto the North Coast, Drive BC the provincial highway alert system issued a Travel advisory for the region, recommending that unless absolutely necessary travel should be avoided on Highway 16, with heavy snow and poor visibility making driving conditions treacherous.

Across the harbour at the Digby Island airport, Wednesday's snowfall resulted in the diversion of the early morning flight for Air Canada Jazz. 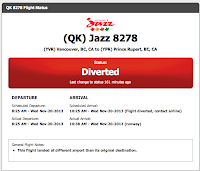 Thus far, the remainder of the day at YPR, seems to have been un-affected by the snow of the day.

Things will change fairly rapidly for the North Coast over the next twelve hours, with temperatures rising through the overnight, to  5 degrees by morning and then a further high for the day of 7 by mid afternoon on Thursday. Temperatures will remain in the 8 degree range through until next week. 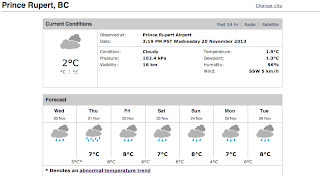 With the warm Pacific front arriving shortly, so too will the rains, at least 15 mm overnight and a further  40 mm through the day Thursday. With more precipitation into next week. The full forecast can be found here.

Further inland, the snow will continue overnight, with a snowfall warning in effect for inland areas,  the warmer air and rains not arriving to the east until Thursday afternoon.
Posted by . at 4:13 PM